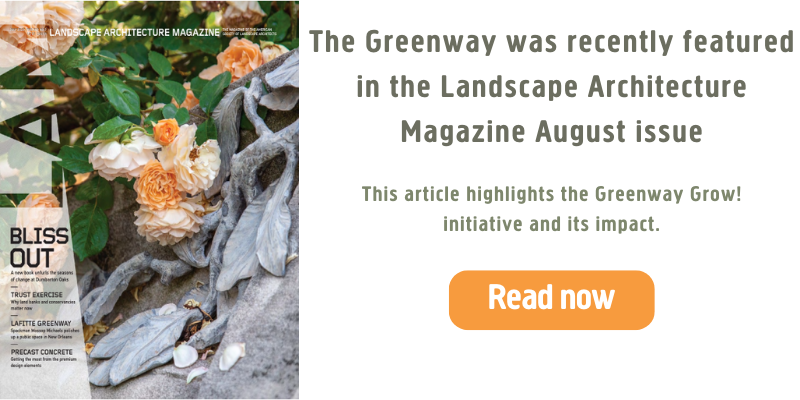 Help plant the next 900 trees of the Greenway's 1,000 Cypress Forest, and support wildflower meadow establishment by contributing to the GROW! Campaign.

In order to ensure that the Greenway’s landscape is sustainable, safe, and beautiful over the long-term, and herbicide use is limited, the partners are undertaking this landscape restoration project. Award-winning landscape architecture firm, Spackman Mossop Michaels, designed this adaptive planting and management plan for the Greenway’s bioswales and meadows that will restore and expand our urban tree canopy, restore native plantings, support pollinators, and naturally prevent the overgrowth that has inhibited the bioswales’ functionality and has been a community visibility and safety concern.

Site preparation began this week to remove overgrowth and invasive species in anticipation of the initial Cypress trees and flower meadow plantings this April. Next week, SPROUT NOLA will begin tarping and preparing the site for meadow planting. The first 100 Cypress trees of the 1,000 Cypress forest will be planted in honor of Earth Day this April. Friends and SOUL are recruiting volunteers for this tree planting. Sign up to volunteer at www.lafittegreenway.org/events. 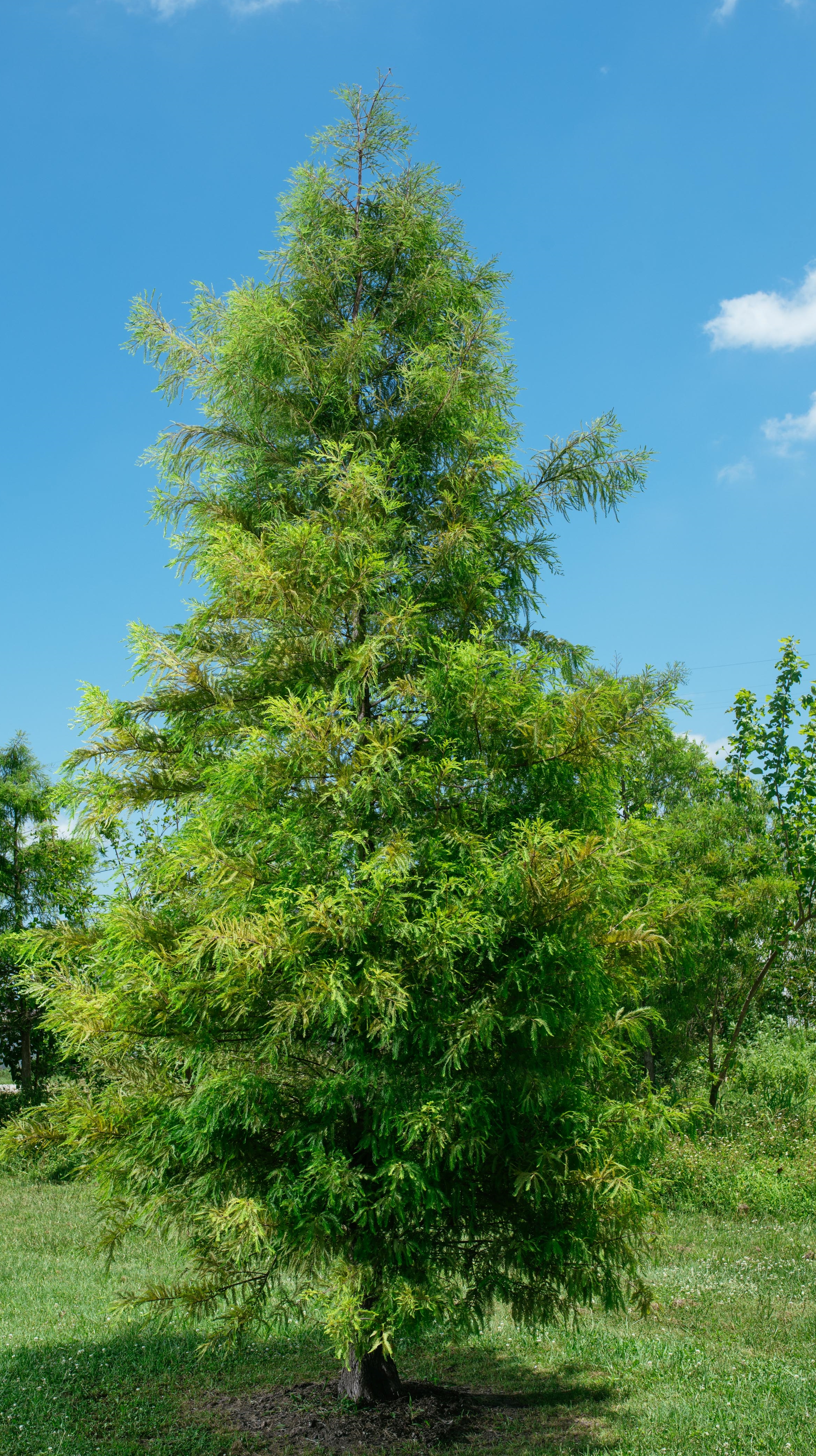 The 1,000 Cypress Forest will be planted in the Lafitte Greenway’s bioswales. The land that is now the Greenway was once a Cypress swamp. This project will re-establish the native tree canopy.

The Cypress will be closely planted 10 feet-apart, following Spackman Mossop Michael’s design for natural management. As the trees grow, their dropped Cypress nettles will self-mulch, reducing understory plant growth and invasive species establishment, while providing habitat for birds and wildlife.

The tree planting project will be led by SOUL, working with community and corporate volunteers. 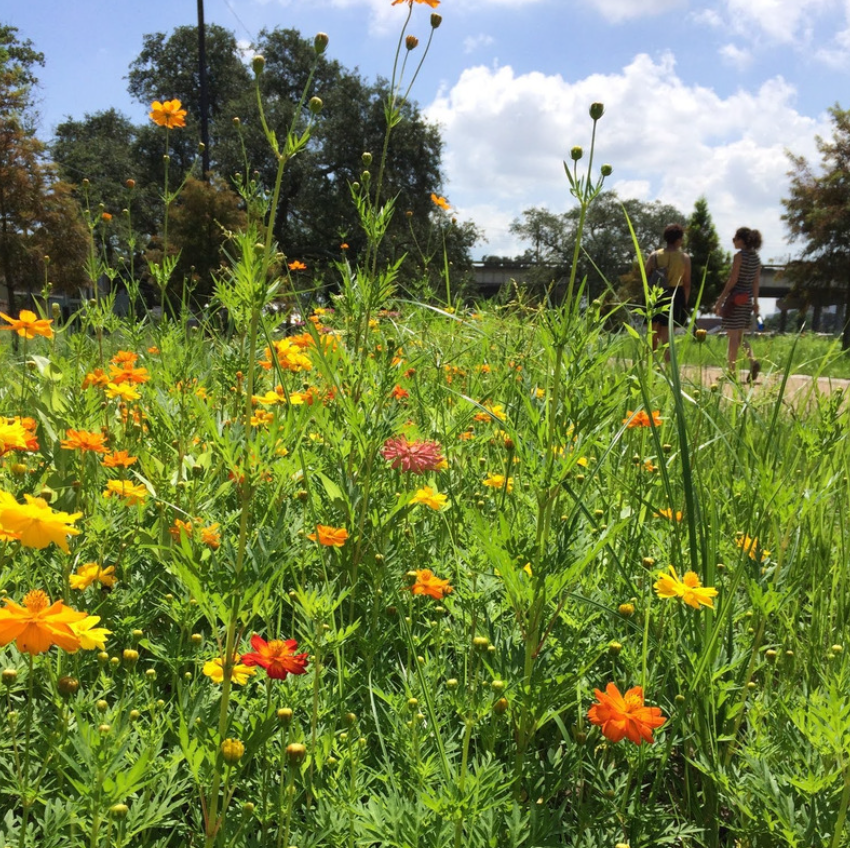 Beginning this April, SPROUT NOLA will plant lowland flower meadows along the Lafitte Greenway Great Lawn between N. Galvez Street and N. Claiborne Avenue. These lowland meadows will beautify the Greenway, support pollinators and wildlife habitat, and provide an opportunity to engage and educate farmers and the larger community.

The meadow planting project is possible thanks to support from the Coypu Foundation Trust established by John S. McIlhenny. 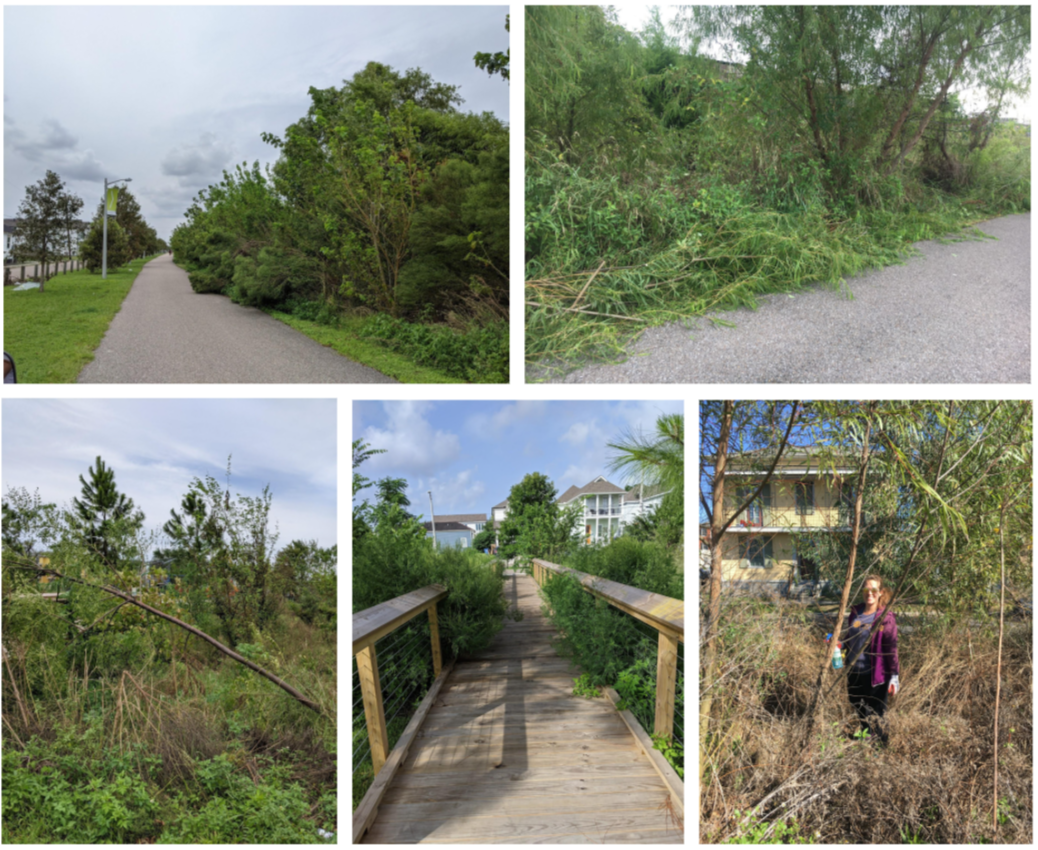 The Need for Environmental Restoration

When the Greenway opened in 2015, the original planting plan and maintenance plan was never realized. The plants that established in the bioswales largely “volunteered,” including a number of problematic invasive species and significant overgrowth that have inhibited the bioswales function for stormwater management. Additionally, community leaders including the Lafitte Greenway Ambassadors, bringing diverse community voices to the Greenway’s work, identified bioswale overgrowth and as a significant safety concern of community members in the Greenway’s Treme/Lafitte neighborhoods. 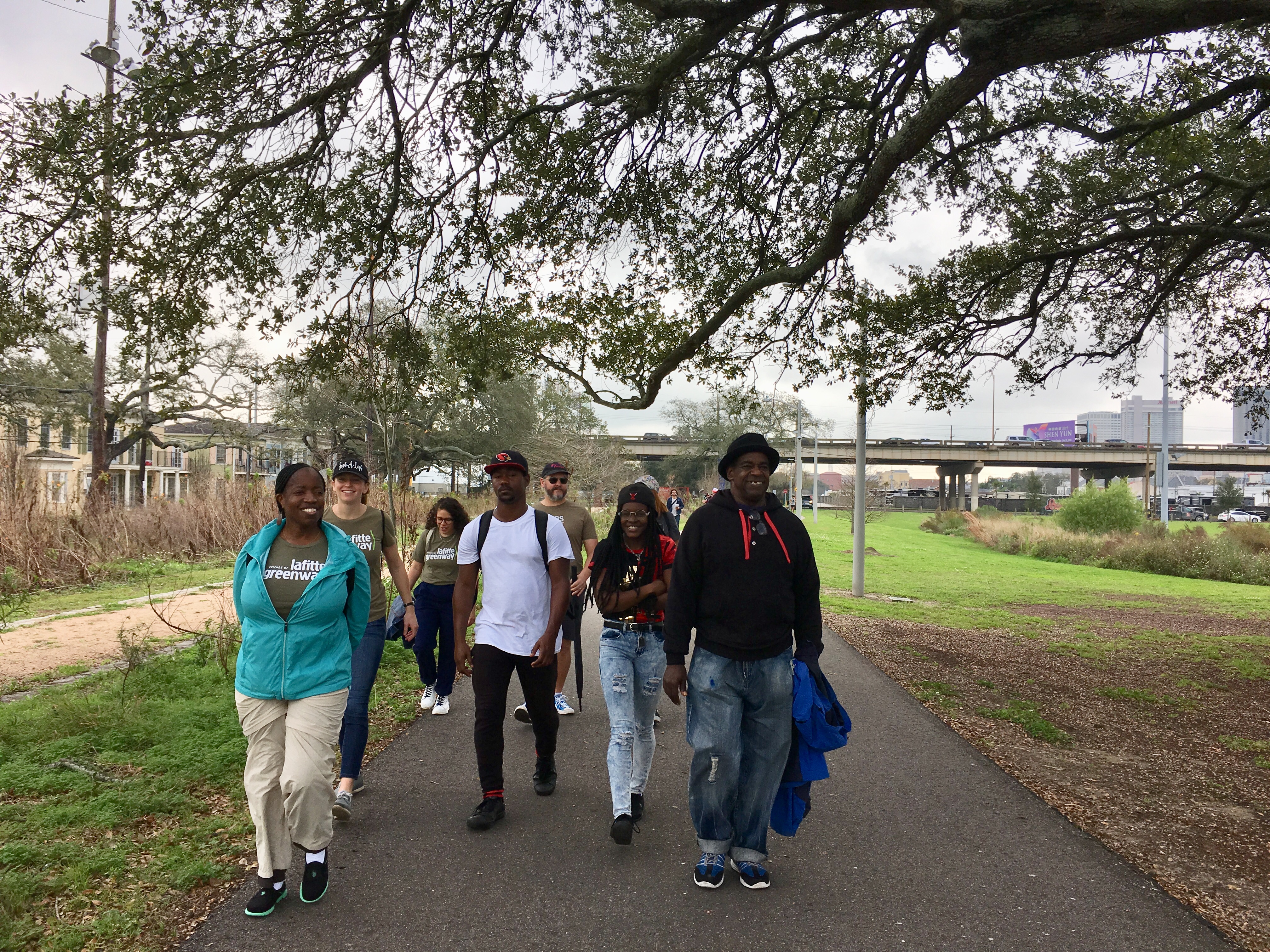 In order to ensure that the Greenway’s landscape is sustainable, safe, and beautiful over the long-term, to limit herbicide use, reduce long-term maintenance costs, and respond to community demand, City and environmental partners are undertaking this landscape restoration project. Once this project is complete, the Greenway's non-turf landscape will be managed using a maintenance manual and plan currently being developed by City agencies for use citywide, as this and several other green infrastructure projects come online in the coming years. 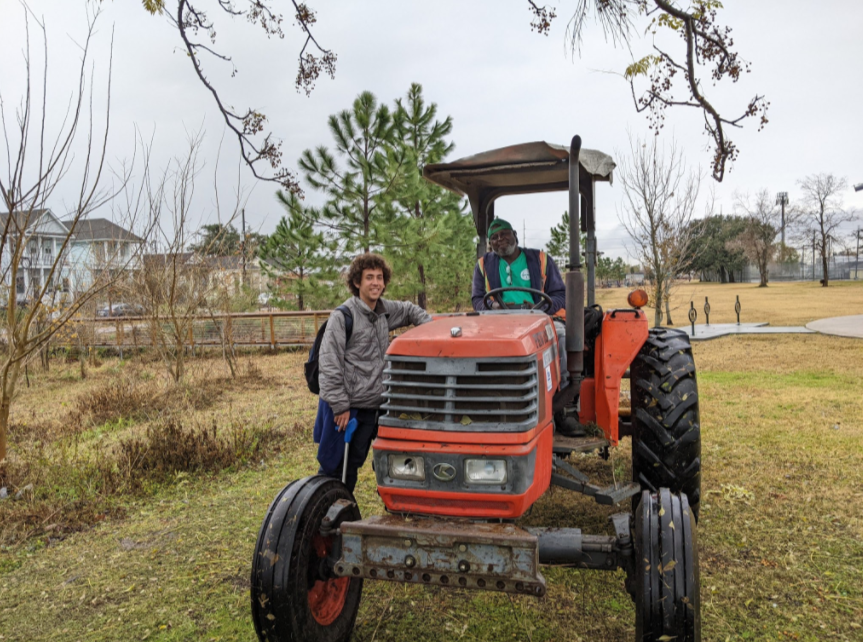 Site Preparation is in Progress

The bioswale section between N. Dorgenois St. and N. Galvez St. has been cut back by the City of New Orleans personnel and contractors in order to prepare the site for the first 100 Cypress tree plantings this April. The Department of Parks & Parkways identified the trees to remove and retain in the bioswales to prepare the site. Many invasives and volunteer weed trees with poor growth patterns and weak root systems have been removed to prepare the site.

Bioswales between N. Galvez St. and N. Claiborne have been cut-back, and will continue bi-annual cuttings to reduce woody overgrowth.

In preparation for meadow plantings, the planned meadow area will be covered in tarps to kill weeds and grass underneath. Then, SPROUT will conduct a controlled burn to put nitrogen and nutrients back into the soil. After, the area will be seeded with fast growing flowers to outgrow weeds and unwanted plants. Flowers will begin to bloom during the summer. SPROUT will plant cover crops.