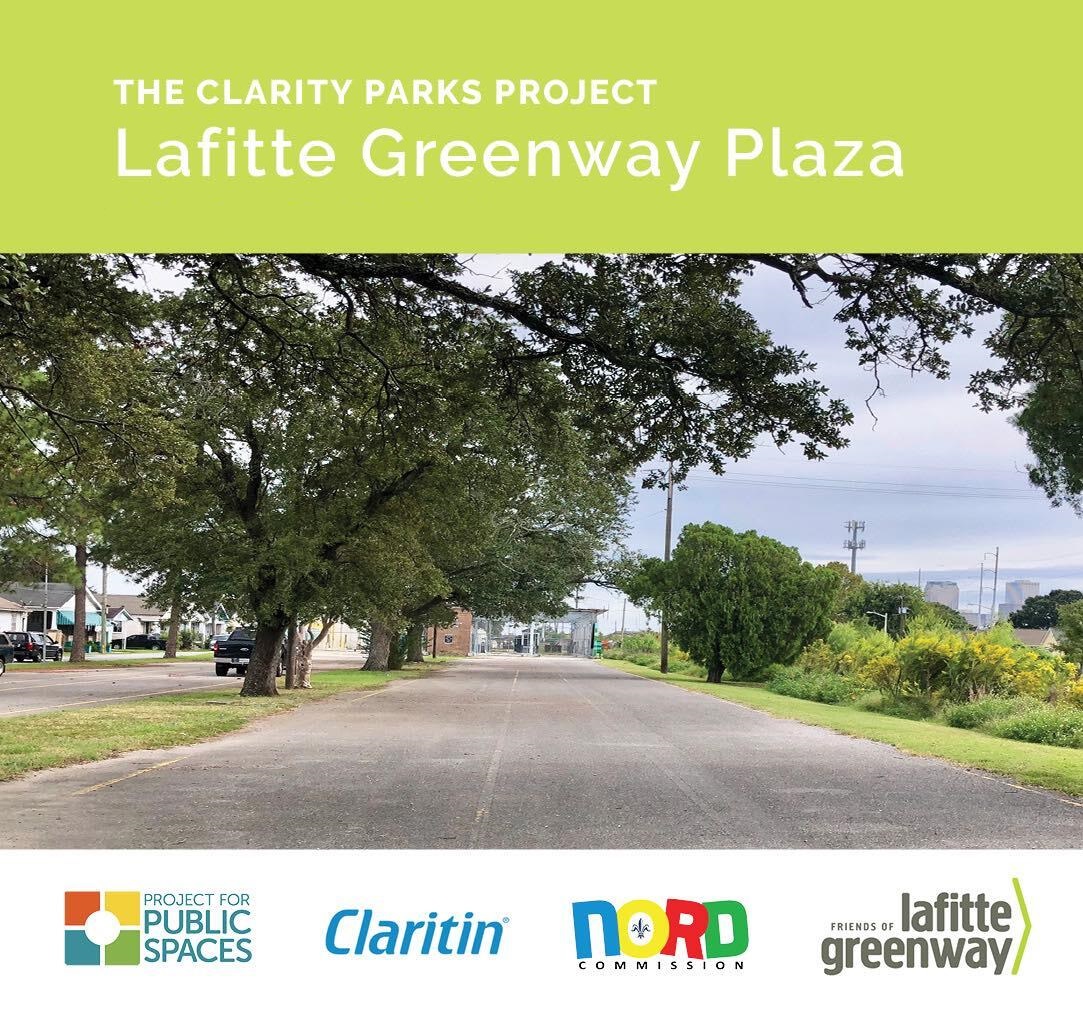 NEW ORLEANS, LA -- Friends of Lafitte Greenway and the New Orleans Recreation Development Commission (NORD) are creating a new pedestrian Plaza on the Lafitte Greenway in Mid-City this fall. Working in partnership with leading national place-making nonprofit, the Project for Public Spaces and Claritin® through the Clarity Parks Project, the group will begin the transformation of the driveway of the former Brake Tag Station where the Greenway meets the Bayou St. John into a vibrant and welcoming pedestrian plaza with public art, landscaping, stormwater management infrastructure, farmers markets, and more. This $40,000 rapid-build project has just entered the design phase, and is set to be complete this November, responding to the key need for more outdoor public spaces in the midst of the Coronavirus pandemic.

This transformation is made possible thanks to a grant from The Clarity Parks Project: A collaboration between Claritin ® and Project for Public Spaces to improve public spaces in three communities across the U.S. that have been impacted by natural disasters, and help them to fulfill their vital role in their communities. The Lafitte Greenway is one of three national Clarity Parks grantees in 2020 along with Republic Square in Austin, Texas and H.A. Chapman Centennial Green in Tulsa, Oklahoma.

“Our public parks and plazas have never been more important,” says Friends of Lafitte Greenway Executive Director Sophie Vorhoff, “This year, we’ve seen a growth in Greenway use during this pandemic, as people turn to parks and open spaces to get out of their homes, to exercise and safely connect to their city and community. This rapid-build Greenway Plaza will respond to this need, and lay the foundation for the continued development of a new community space in Mid-City where the Greenway meets the Bayou.”

“NORD is pleased to partner with the Friends of Lafitte Greenway, Project for Public Spaces, and Claritin® to create this new pedestrian Plaza on the Greenway," says NORD CEO, Larry Barabino, Jr. "We have seen an increase in outdoor parks and trails usage over the last several months confirming, what we have already known, our parks and outdoor spaces are critical to community development, and overall health and wellness. This rapid-build project is one of many NORD looks to complete in our efforts to expand services and programming to residents across the Greenway."

The Project for Public Spaces said, "We are proud to be able to support Friends of Lafitte Greenway through a grant and technical assistance thanks to Claritin’s Clarity Parks Project. We look forward to helping them fulfill the plans laid out by the New Orleans community to showcase local talent and creativity in this wonderful public space and build resilience through new green infrastructure."

Through the Clarity Parks Project: Lafitte Greenway Plaza, Friends of Lafitte Greenway (Friends) will invest $40,000 to initiate the development of the former driveway and set the course for the area’s integration into the Lafitte Greenway public park, with a focus on the front of the site, where the Greenway meets the Bayou St. John at the intersection of Lafitte St. and Jefferson Davis Parkway.

The project complements recent and upcoming investments at this key intersection of the Lafitte Greenway, including  the City of New Orleans’ $1.5 million renovation of the former Brake Tag Station on the Greenway at N Lopez Street into a community pavilion and the January 2020 opening of a new playground. City officials, NORD, and Friends cut the ribbon on the Pavilion in March of this year. The Plaza will complement the Brake Tag Pavilion development, continuing the transformation of the site from a place for cars to a place for people.

The Plaza will feature a signature art installation by Will Nemitoff, Iris of Memory, commissioned by Friends, The Arts Council of New Orleans, and NORD with support from The City of New Orleans Percent for Arts Program and Elaine Ravich as a memorial in honor of Deborah Vorhoff, local artist and mother. The sculpture will be an iconic 17-foot tall metal iris flower, with illuminated petals and leaves that double as benches.

Friends has contracted a local collaborative of architects, design professionals, and landscape professionals, Urbanscapes Design + Build Collaborative to design and construct the Plaza. The landscape and stormwater management elements will be installed by Mastodonte,Mastodonte, a female- and black-owned construction company based in New Orleans. Friends and NORD will host a virtual public meeting to gather ideas and priorities on the Plaza design from the community on Tuesday, August 11th at 6pm, and collect input through interactive signage at the site. Information on public input is available at lafittegreenway.org/plaza.

The community’s desired uses will help to inform the design of the space. Confirmed uses include Market Umbrella and the Crescent City Farmers Market weekly Mid-City market, which will move from its standing location nearby at the American Can Company to the Greenway Plaza. The Plaza will provide additional space for the market’s growth and easier access for people on foot, bikes, and in cars.

“The Greenway Plaza provides an unique opportunity to blend recreation, art, living with water, and food access in one location,” noted Robin A. Barnes, Interim Executive Director of Market Umbrella and the Crescent City Farmers Market. “Moreover, its central location means that residents from New Orleans East, Uptown and Downtown New Orleans, and Metairie will be able to visit the Thursday market and enjoy the Plaza’s other amenities, as well. We are delighted to partner with Friends of Lafitte Greenway on this endeavor.”

To learn more about the project, and to participate in the public input process, visit lafittegreenway.org.

About Friends of Lafitte Greenway

About the Lafitte Greenway

The Lafitte Greenway is a public 2.6-mile multi-use trail and linear park connecting the French Quarter to Bayou St. John and Mid-City. Opened in the fall of 2015, the Lafitte Greenway was designed with extensive input from neighborhood and civic groups. Today, the Lafitte Greenway is used by 300,000 people annually. It serves as an active transportation route, and a space for recreation, play, community-building, and environmental sustainability. The New Orleans Recreation Development Commission (NORD) manages the Lafitte Greenway. The City and community have continued to invest in improvements to the Greenway since it’s opening, developing state-of-the-art sports fields, basketball courts, fitness parks, playgrounds, stormwater management features, and art installations, as well as public programming that engages the community and activates the space.