How To Grow A Greenway 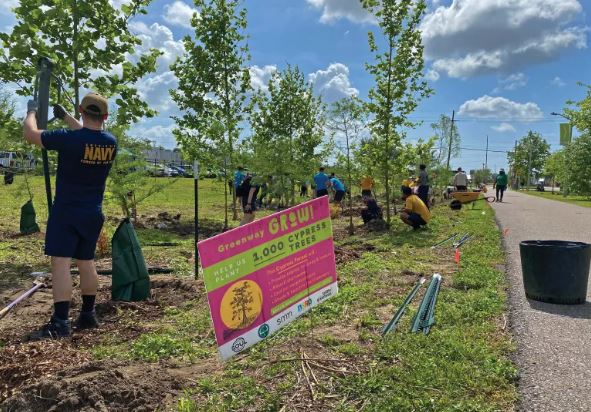 In the years since the park first opened, the city and Friends of Lafitte Greenway have realized additional pieces of the master plan, including playgrounds, basketball courts, and sports fields.

On a recent morning in New Orleans, church parishioners, employees on loan from local businesses, and sailors in town for Navy Week were among the 130 volunteers who showed up to plant 100 cypress trees in a bioswale on the Lafitte Greenway. The city’s Department of Parks and Parkways had already cleared the site bordering the Tremé neighborhood, and staff from the New Orleans office of the landscape architecture firm Spackman Mossop Michaels (SMM) and a tree-planting nonprofit group had marked off where the 15-gallon, one-inch-caliper pond and bald cypress were to go. So the volunteers dug holes, dropped in the trees, backfilled them with soil, staked, and mulched. With everyone pitching in, the job was done in three hours.

It was the first installment of 1,000 new cypress trees planned for the Lafitte Greenway, a popular linear park of more than 40 acres with a paved path running down the middle of it. The project was also part of a new planting and management strategy developed to address long-standing maintenance issues that have left sections of the park looking scruffy. Called Greenway GROW!, the strategy puts forth a maintenance plan as well as discrete projects at key locations that together aim to beautify the landscape, make it more sustainable, and meet the needs and expectations of the communities that line it.

“You do work, you learn something, you do more work, you stay involved,” says Wes Michaels, ASLA, a founding principal at SMM, on advocating for landscape architects to stay engaged not only in the greenway but in all projects after completion. “We typically practice landscape architecture in this model brought to us by architecture: Design it, build it, and walk away from it,” Michaels adds. “That works fine for a building, but when you build a landscape, that’s just the beginning of the landscape.”

The greenway got its start as a grassroots drive to create a recreation space from a brownfield site—a mostly fallow no-man’s-land that had been a cypress swamp, then a canal way, and finally a rail corridor. Parts of the site, along with the neighborhoods bordering it—Tremé, Lafitte, Tulane-Gravier, Mid-City, and Lakeview—flooded during Hurricane Katrina in 2005.

In 2010, the city, armed with Disaster Recovery funding from the Community Development Block Grant program, took up the park idea. It contracted with the firm Design Workshop to produce a master plan for a park that would double as a stormwater management system for the area.

Design Workshop’s efforts were led by the Louisiana native Kurt Culbertson, FASLA, now chairman emeritus of the firm but then working out of the Aspen, Colorado, office. They involved an extensive community engagement process with Friends of Lafitte Greenway—which sprang from the grassroots group that conceived the park idea—serving in an advisory capacity. That work resulted in a plan for a 3.1-mile-long park of varying widths engineered to handle the water that would fall on the site from a 10-year storm. The plan—which incorporated bioswales, native plantings, and the reduction of impervious surfaces—won an ASLA Professional Award of Excellence for Analysis and Planning in 2013.

Two years later, 2.6 miles of the greenway opened, stretching from the French Quarter through the same neighborhoods that flooded during Katrina to Bayou St. John. It was one of the first major public infrastructure projects in New Orleans after Katrina and the city’s first large-scale use of green infrastructure.

But parts of the master plan, such as a grove of pecan trees and a border of Louisiana irises, were never implemented. The bioswales weren’t planted according to the original specs. Wildflower meadows were never successfully established. A big chunk of the project’s $9.1 million budget went to site cleanup.

“We planted what we could afford to plant,” Culbertson says. “We would have planted more densely if we had more budget.”

Even back then, Culbertson worried that the city, strapped for money and overwhelmed with reconstruction needs, would not be able to maintain the greenway. Responsibility for the city’s parks is divided among municipal agencies, complicating management. Culbertson advocated for a conservancy and a dedicated fundraising mechanism to maintain the park, but those ideas did not gain traction at the time.

To some extent Friends of Lafitte Greenway has stepped into the conservancy role. The official manager of the park is the New Orleans Recreation Development Commission, a city agency known as NORD. But Friends of Lafitte Greenway is party to a public–private partnership with the city whereby it serves as an adviser, helps shape projects, and provides programming for movie nights, outdoor exercise classes, and an annual festival with live music, art installations, and craft and food vendors.

In the years since the park first opened, the city and Friends of Lafitte Greenway have realized additional pieces of the master plan, including playgrounds, basketball courts, and sports fields. In 2017, the city hired SMM to help convert an auto inspection facility into a community center, completed in 2020. The center’s plaza is now the site of a weekly farmers’ market.

Greenway usage has increased 10 percent annually, says Sophie Harris Vorhoff, the executive director of Friends of Lafitte Greenway. The paved path is used 325,000 times a year, according to trail counts, including by people who rely on it to get to and from work. The playgrounds teem after school.

“For folks who live by the greenway, it’s their neighborhood park where they go with their kids,” Vorhoff says. “And it’s also the backbone of the bike network.”

But maintenance of the greenway was an issue almost from the beginning, just as Culbertson had predicted, and the park’s bioswales, in particular, came to be seen as a problem. Maintaining green infrastructure was new to New Orleans, says Michael Karam, the director of the Department of Parks and Parkways. And with city agencies underfunded and stretched thin, there was only so much time staff was able to devote to the greenway anyway.

As the bioswales became overgrown with invasive trees and underbrush, the bushy vegetation spilled over onto the greenway’s path and compromised sight lines. Some residents of Tremé and Lafitte, historically Black neighborhoods, felt that the bioswale close to them looked unkempt and, frankly, scary. With crime an issue in the city, some area residents said they were fearful of walking or biking by.

Of course, landscape architects everywhere deal daily with the fact that some green infrastructure projects might look untidy to those expecting neat lawns and flower borders. But the last thing anyone wanted was for members of the community to feel the greenway was not welcoming. Something needed to be done.

That something turned out to be the revival of an adaptive management approach that SMM had proposed back in 2017. That year, the city had recruited the firm to help clean up the greenway before the National Recreation and Park Association conference was held in town. SMM worked on-site with a city employee and a contractor who was on retainer to do a quick fix on the bioswales and meadows. Later that same year, the firm completed an adaptive management plan for the entire greenway. But a change in mayoral administrations meant “the plan never really made it off the runway,” Michaels says. “Everything went completely silent for, like, two years.”

But after Friends of Lafitte Greenway got a small grant to work on the meadows, and Emily Bullock, a principal at SMM, joined the board of Friends of Lafitte Greenway, SMM’s ideas resurfaced. They are encapsulated in the new Greenway GROW! strategy, adopted by the city and nonprofit groups involved in the park. It lays out how the greenway should be maintained and which entity is responsible for which tasks.

Spackman Mossop Michaels, which is currently working on the greenway on a pro bono basis, prepared a diagram with clear instructions. For a bioswale near the Carrollton Avenue intersection, for example, it states: “Mow twice a year in November and June; maintain a cleanly mowed edge at lawn.”

Greenway GROW! also proposes specific projects to address area residents’ concerns and ultimately lessen the maintenance the city will have to do. Planting the 1,000 water-guzzling cypress trees, for instance, will create forested areas that will reduce mowing, soak up excess water, add shade, provide habitat for wildlife, and restore parts of the site to something like the cypress swamp it was before it was clear-cut. “The greenway is a great place to build back up our urban forest,” Bullock says.

The nonprofit partner for the greenway’s tree-planting efforts, Sustaining Our Urban Landscape (SOUL), raised $22,500 for the first 100 trees, says Susannah Burley, its executive director. The trees were planted 10 feet apart on center in a grid pattern in a previously overgrown bioswale. Once a canopy forms, the trees are expected to self-mulch—their fallen needles carpeting the ground, discouraging understory growth.

While SOUL and Friends of Lafitte Greenway seek funding for the remaining 900 trees, another nonprofit partner, an organization named SPROUT NOLA that trains farmers and gardeners, is developing wildflower meadows to replace one and a half acres of weedy turf. The new meadows are targeted to areas of heavy use: around an expansive lawn where people like to play soccer and bordering a community swimming pool.

SPROUT first tarped the areas to kill weeds and grass, then did a controlled burn to put nitrogen and nutrients back into the soil, interspersed with demonstrations in the use of a community tractor for tilling, says Marguerite Green, SPROUT’s executive director. The areas were then seeded with a tall cover crop of sunn hemp, expected to bloom this summer, after which the plants will be plowed into the soil and perennial wildflowers seeded. The meadows will add beauty to the greenway, provide habitat and food for pollinators, and reduce mowing time, costs, and the use of gasoline. “Mow once a year, in February. No herbicide or fertilizers, to be spot-weeded as needed,” SMM’s diagram instructs.

“We feel comfortable proposing meadows now because SPROUT will be there to continue to do this over the long term,” Bullock says. “We have all the people at the table who can help make sure this is successful into the future.”

Culbertson, who has kept tabs on the greenway from afar and visits whenever he’s in town, says he is pleased that the collaborative approach that got the park off the ground has endured. “Everyone is pulling together,” he says.

The city and Friends of the Lafitte Greenway are currently working on a plan for the last half mile of the greenway. And a study is underway to determine whether the park’s design could be tweaked to absorb even more stormwater, with the goal of alleviating flooding in surrounding neighborhoods caused by the increasingly frequent, intense rain events that climate change is bringing. Given the track record on getting things done on the Lafitte Greenway, anything seems possible.