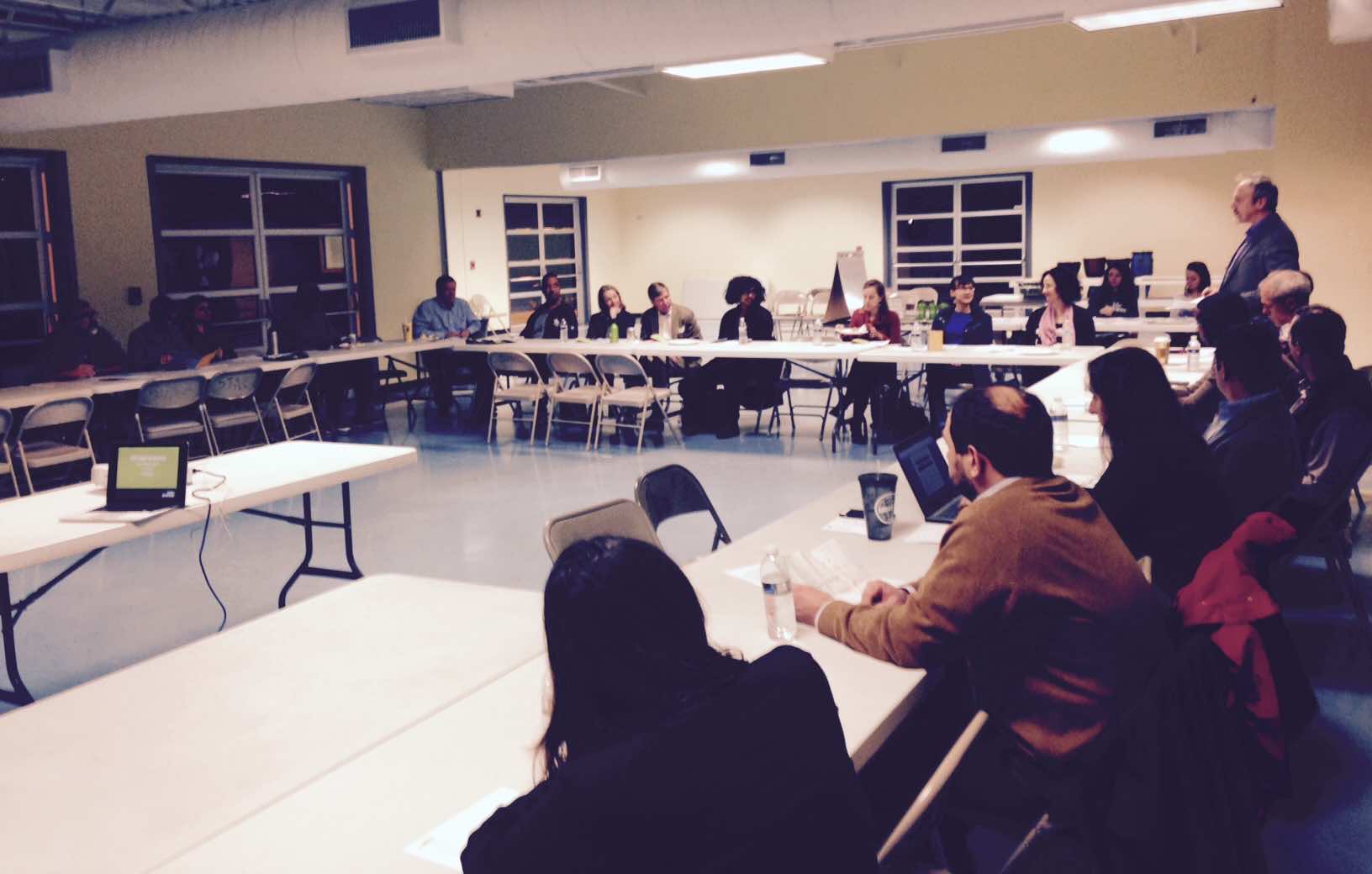 Charles Barclay is Asset Manager for Stirling Properties on a variety of retail and office properties in the Greater New Orleans area, including Mid-City Market along the Lafitte Greenway. A native of Washington D.C., Charles moved to New Orleans to participate in the area’s rapidly evolving real estate industry. Charles previously worked for CW Capital Asset Management in Bethesda, Maryland where he was involved in the management of over $500 million of REO multifamily assets across the United States. He graduated from the University of Maryland in 2009 where earned a degree in history.

Kevin P. Centanni is an entrepreneur, inventor, and hobbyist. For over 25 years, Kevin and his company, Controlled Entropy, have designed and produced hundreds of interactive experiences, museum exhibits, tradeshow displays, and electronic gadgets for clients worldwide. Kevin grew up in Metairie but lived in New York City for most of his adult life. He returned to New Orleans in 2010 and now lives next to the Lafitte Greenway. In 2014, Kevin bought the historic but abandoned 10th Precinct Police Station located on the Greenway. He is currently working with Susan Spicer to open a restaurant in the space. Kevin's personal interests include industrial archaeology, New Orleans history, pinball, trains, and infrastructure.

Amy Boyle Collins is a seasoned communications professional with deep roots in the region working on marketing, branding, advertising, community relations, events and fundraising for a host of organizations. She currently serves as Director of Strategy for Gambel Communications.  Amy has a Bachelor of Arts in Communication from Loyola University New Orleans and a Master's in Mass Communication from Louisiana State University’s Manship School of Mass Communications. She has served as an adjunct faculty member at Loyola University New Orleans and Tulane University School of Continuing Studies. From 2006 to 2012, Amy served as executive director of the Young Leadership Council (YLC) where she managed operations, spearheaded fundraising, planned events and worked with the board of directors on strategic priorities. A highlight of her time at the YLC was developing the Wednesday at the Square concert series into an annual rite of spring, garnering more than $500,000 in sponsorship revenue annually and attracting 6,000 people to Lafayette Square each week. Born and raised in New Orleans, Amy has always been active in the community, serving on boards and committees for various organizations, including the Super Bowl Host Committee in 2002 and 2013, New Orleans Redevelopment Authority (NORA), Committee for a Better New Orleans, Association of Fundraising Professionals, Dress for Success, International Association of Business Communicators, Ad Club of New Orleans, YLC (before joining the staff) and the Catholic Youth Ministry Office of the Archdiocese of New Orleans.

Foster Duncan has more than 30 years of senior corporate, private equity, and investment banking experience. Mr. Duncan is an Operating Partner of Bernhard Capital Partners, a private equity fund focused on investing in industrialized energy services. Mr. Duncan also serves as a Senior Advisor to EHS Partners in New York, a management consulting firm focused on improving operational effectiveness, earnings, and growth. Previously, Mr. Duncan was a Managing Director at Advantage Capital, Managing Member of KD Capital L.L.C., Executive Vice President and CFO of Cinergy Corporation, Chairman of Cinergy’s Investment Committee, and CEO and President of Cinergy’s Commercial Business. Foster has also held senior management positions with LG&E Energy Corp., Freeport- McMoRan Copper & Gold, Howard Weil, and Edison Electric Institute. He graduated with Distinction from the University of Virginia and later received his MBA degree from the A. B. Freeman Graduate School of Business at Tulane University. Foster serves on the Boards of Directors of Atlantic Power Corporation (NYSE:AT) in Boston, Massachusetts and Greentech Capital Advisors in New York, a firm focused on M&A services and general strategic advisory services for Sustainable Infrastructure companies and projects. Mr. Duncan is active in a number of civic organizations including in New Orleans the Board of Directors of the Eye, Ear, Nose and Throat Hospital Foundation, The Nature Conservancy of Louisiana, and Parks for All and in Charlottesville, Virginia the National Advisory Board and Selection Committee of the University of Virginia Jefferson Scholars Program and Co-Chairman of the Jefferson Circle, which promotes the preservation of the Rotunda and historic Grounds.

Ernest Johnson is a community leader, an advocate for youth and families, and a respected local organizer. For the past 6 years, he worked as a community organizer for Families and Friends of Louisiana’s Incarcerated Children (FFLIC), fighting to bring the voices of families and communities into discussions concerning juvenile incarceration and other social matters. In addition to his work at FFLIC, Ernest is President of the Treme/Lehmann Booster club, a former board member of Safe Streets Strong Communities, and a current national board member of Equal Voice Action. He is also co-chair and member of the advisory committee for the Juvenile Detention Alternative Initiative (JDAI) and worked on the 2015 electoral campaign of State Representative John Bagneris. He has spoken on issues of equity and incarceration, and the importance of centering parents and families, at Tulane University, the Joan Mitchell Center, on WBOK, and in two interviews with the New Orleans Times Picayune. He was born in the 6th Ward in the Lafitte Housing Development and the Lafitte area has been home to him through all the changes and revitalization it has experienced over the decades. Recently, he organized the First Lafitte Family Reunion, which was attended by over 500 former and present Lafitte neighborhood residents. His passion is connecting community members to each other and to opportunities in the city and he is excited to continue that work with Friends of the Lafitte Greenway.

Natalie Mitchell is an attorney specializing in public policy research and advocacy. She currently works for the Business Council of New Orleans managing Forward New Orleans, a coalition of local business, civic, and neighborhood organizations who came together after Hurricane Katrina to advocate for improvements in city governance. Natalie previously worked for the New Orleans City Council as a staffer for Council President Jackie Clarkson. She is a native of Waveland, Mississippi and moved to New Orleans in 2006 to attend Tulane Law School. Natalie has lived near the Greenway for the past three years. During that time she has grown to appreciate the positive impact the Greenway is having in connecting and improving adjacent neighborhoods and is eager to do her part to make sure we get the most out of this amazing community asset.

Jeffrey Thomas has served on Friends of Lafitte Greenway’s Board of Director’s since 2013, and has held the position of Chair of the Board since November, 2014. He is seeking re-election for a second board term. Jeffrey is principal of Thomas Strategies, LLC, a strategic planning firm that facilitates public-private financing, policy, and partnership solutions to spur resilient community and economic development. Jeffrey has over fifteen years of legal, public administration, and community development experience, including public- and private-sector projects aimed at increasing community investment in environmental quality, sustainable public infrastructure, neighborhood-scale economic revitalization, renewable energy solutions, and public access and participation in governmental decision-making.