Richard Campanella on the History of the Lafitte Greenway

The Lafitte Greenway is a 2.6-mile long linear park and bikeway connecting the Faubourg Tremé neighborhood near the French Quarter, to Bayou St. John in the vicinity of Mid-City. Although it opened as a park in 2015, the main section of the Lafitte Greenway was first inscribed into the New Orleans landscape over 220 years earlier, during the late Spanish colonial era, and it began not as a pathway, but as a drainage and navigation canal.

The man behind the canal was Don Francisco Luis Héctor, Baron de Carondelet, a Belgian in service of Spain who had just been transferred from San Salvador to govern Spanish Louisiana as well as Spanish West Florida.

Gov. Carondelet arrived at New Orleans in January 1792 and found, among many other problems, that the city needed a better drainage outfall as well as a more efficient way to get to Bayou St. John. That rivulet drained into Lake Pontchartrain, whose basin abounded in natural resources and trade opportunities in Spanish West Florida. But the only way to get to the bayou from the city (that is, today’s French Quarter) was to take a two-mile trek along muddy Bayou Road through what is now the Sixth and Seventh Wards.

In the late spring of 1794, Gov. Carondelet announced his administration would have a canal excavated to connect the rear of the city with Bayou St. John. The channel would initially be designed for drainage, and later expanded for navigation use. 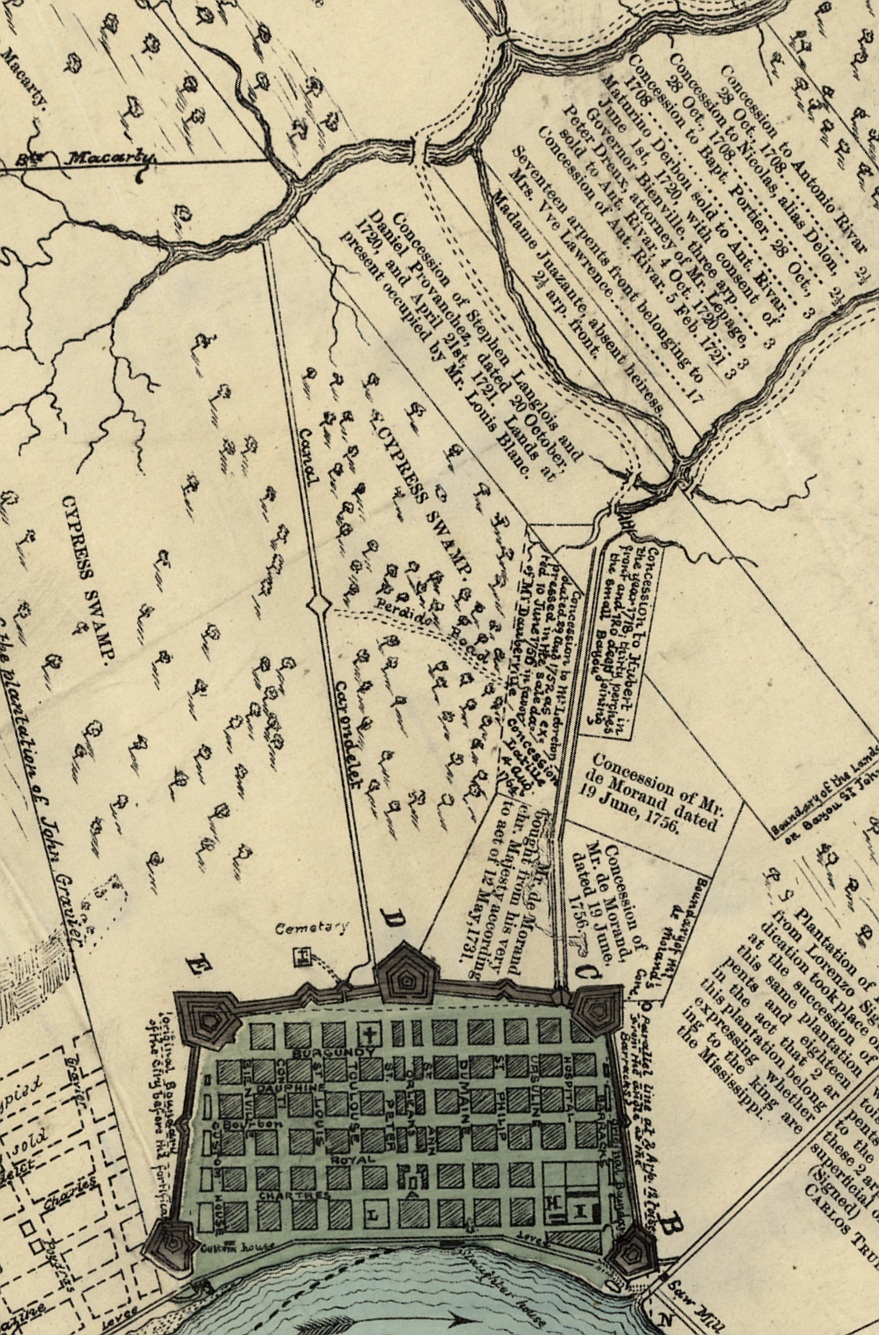 Detail of a 1798 map of the Carondelet Canal connecting the city with Bayou St. John, courtesy of the Library of Congress

His superiors approved the project but did not fund it, so the governor resorted to the labor of 100 presidios (convicts) and sixty enslaved men to clear trees and remove stumps from the soggy terrain of what is now New Orleans’ Fifth Ward.

By the end of 1794, workers had dug out a channel six feet wide and nearly as deep, running 1.6 miles from present-day Basin Street to the main channel of Bayou St. John and serving to help drain stormwater runoff in the city proper. During 1795, another 150 enslaved workers joined the workforce to widen the canal to 15 feet and shore up its banks as guide levees. In 1796, the waterway, officially named the Carondelet Canal, opened for vessels.

The next year, Spanish authorities transferred Gov. Carondelet to Quito, Ecuador, and his eponymous canal, having lost its champion, soon fell into disrepair.

At around that time, a Frenchman from Saint-Domingue (present-day Haiti) named James Pitot arrived at New Orleans. Over the next decade, Pitot witnessed the transfer of Spanish Louisiana to France in 1800 and its sale to the United States three years later, followed by his own appointment as mayor of New Orleans in 1805. With urban growth on the horizon, Pitot knew that the natural resources of the Lake Pontchartrain basin would be needed for new housing, and that the Carondelet Canal and Bayou St. John would be critical for accessing them.

In 1805 Pitot organized the Orleans Navigation Company, and in 1806 his workers began expanding the Carondelet Canal and clearing out Bayou St. John for larger vessels. Tow paths were laid atop the guide levees so oxen or mules could pull the barges, and timber-reinforced docks were built around the inland turning basin, thus giving rise to today’s Basin Street. Workers also installed a drawbridge over Bayou St. John and a dock and lighthouse at Spanish Fort by the lakeshore. Pitot’s project, which called for the privatization of a publically owned asset and spawned a long legal battle with the city, would take $300,000 and over a decade to complete.

In May 1817, the Orleans Navigation Company reopened the Carondelet Canal, charging $1.25 per ton for passage. Business boomed. “Where there was formerly a filthy ditch and noisy frog-pond,” wrote John Adems Paxton in 1822, “we find a beautiful canal, with a good road and walks on each side, with gutters to drain off the water, and a large and secure Basin where vessels can lie in perfect safety at all seasons.”

According to Paxton, small craft brought in “cotton, tobacco, lumber, wood, lime, brick, tar, pitch, bark, sand, oysters, [and] furs and peltries” from the lake region, Gulf Coast, and beyond. “We frequently see in the Basin from 70 to 80 sail[boats, and] 550 to 600 barrels, from the West Indies, the northern states, Pensacola, Mobile, Covington and Madisonville.” Enough money was changing hands for the federal government to appoint two federal inspectors to collect fees.

New Orleanians also saw aesthetic properties in the canal, and a popular Carondelet Walk opened along its flanks. Here people would promenade and enjoy views of elaborate “pleasure gardens” maintained on adjacent private property, perhaps implanting the idea of a linear public park. Later, “Carondelet Walk” became the name of the street flanking the downriver side of the Old Basin Canal; today, it is called Lafitte Street.

The next year, investors uptown began hiring Irish “ditchers” to dig a canal to connect the lake with the rear of today’s Central Business District. Named the Basin Canal and completed in 1838, the new waterway (now the Interstate-10 corridor as well as the Pontchartrain Boulevard/West End Boulevard neutral ground in Lakeview) spelled additional trouble for the Carondelet Canal. It didn’t help that New Orleanians came to think of the Carondelet Canal as the “old” canal, and its rival as “new.” The nicknames stuck, and for a century to come, folks called the two waterways the Old Basin Canal and New Basin Canal.

The competition took its toll. The Orleans Navigation Company went bankrupt in 1852 and auctioned its assets to another firm, the New Orleans Canal and Navigation Company, which resumed operations on the Old Basin Canal. “The large fleet of brigs, schooners, sloops, and steamers…strikes the attention of the stranger,” wrote the New York Times of the channel in 1853, “and he wonders how the vessels ever got…into the heart of the city.” Management shifted again in 1857 to the Carondelet Canal and Navigation Company, but traffic still lagged behind the New Basin Canal. 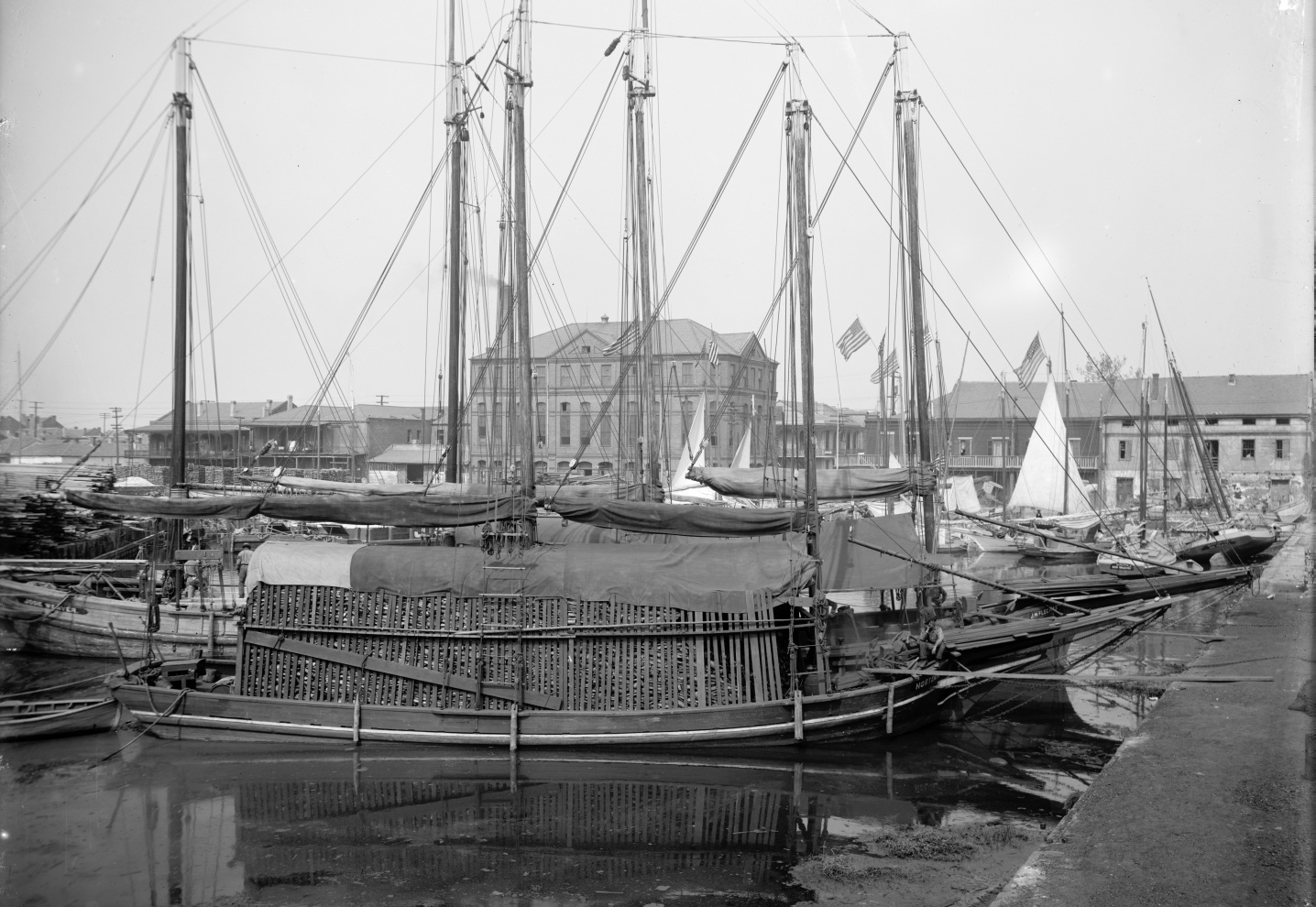 Firewood stored in luggers at Old Basin Canal turning basin circa 1910, Globe Theater in rear, courtesy of the Library of Congress 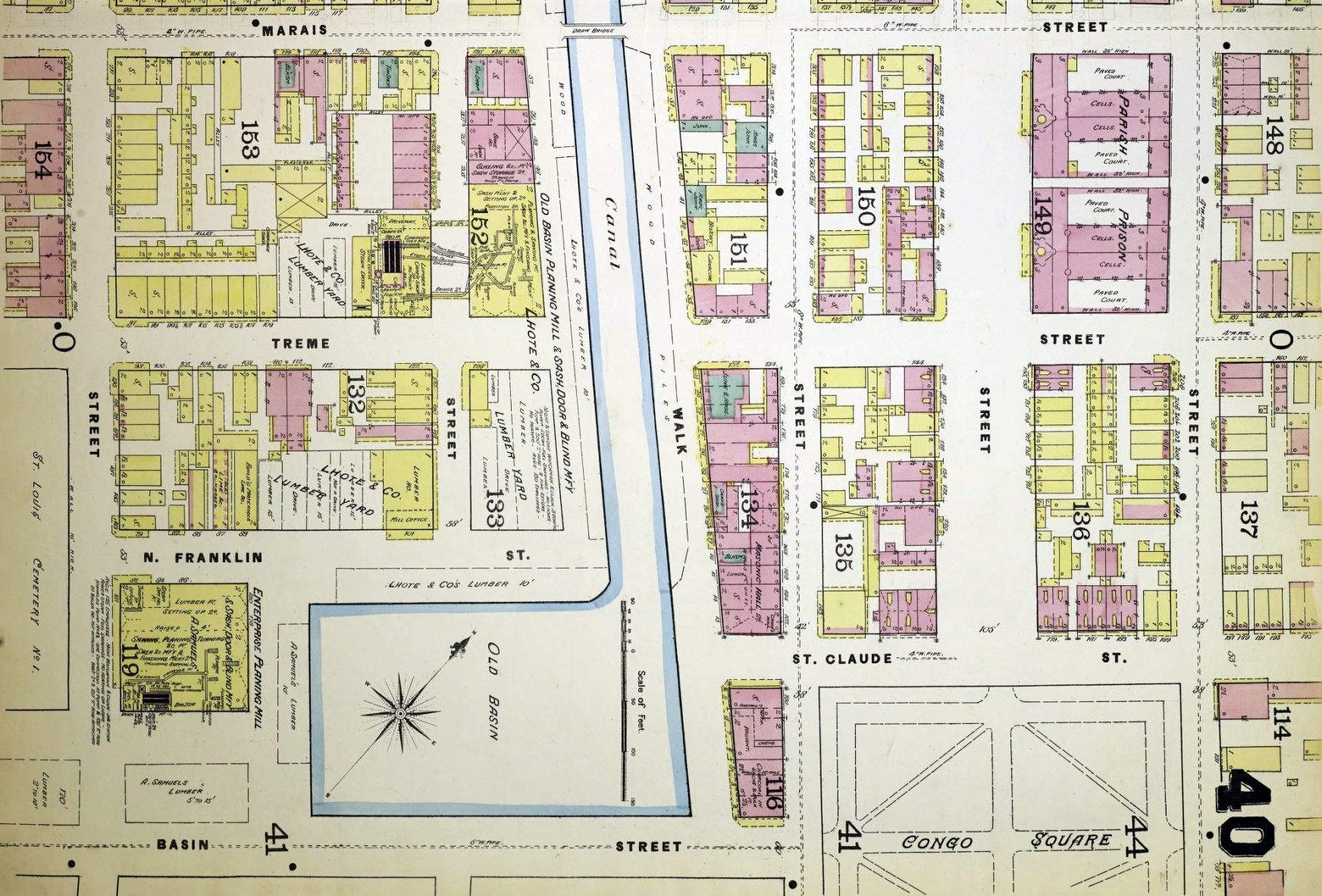 Yet the aging waterway helped sustain local industry, particularly around its turning basin, an inland quay where vessels could arrive, dock, load, unload, and turn around to depart. Located where present-day Basin Street becomes Orleans Avenue, this bustling little port had around its flanks dozens of lumberyards, planing mills, charcoal deposits, firewood yards, stables, warehouses, light industry, and food handlers, particularly those dealing with shellfish and finfish. Within a few blocks could be found the Parish Prison, the 350-foot-long Tremé Market, the famed Globe Theater, the notorious “Storyville” red-light district starting in 1898, the St. Louis cemeteries #1 and #2, Congo Square, and expansive Creole neighborhoods, chief among them the Faubourg Tremé. 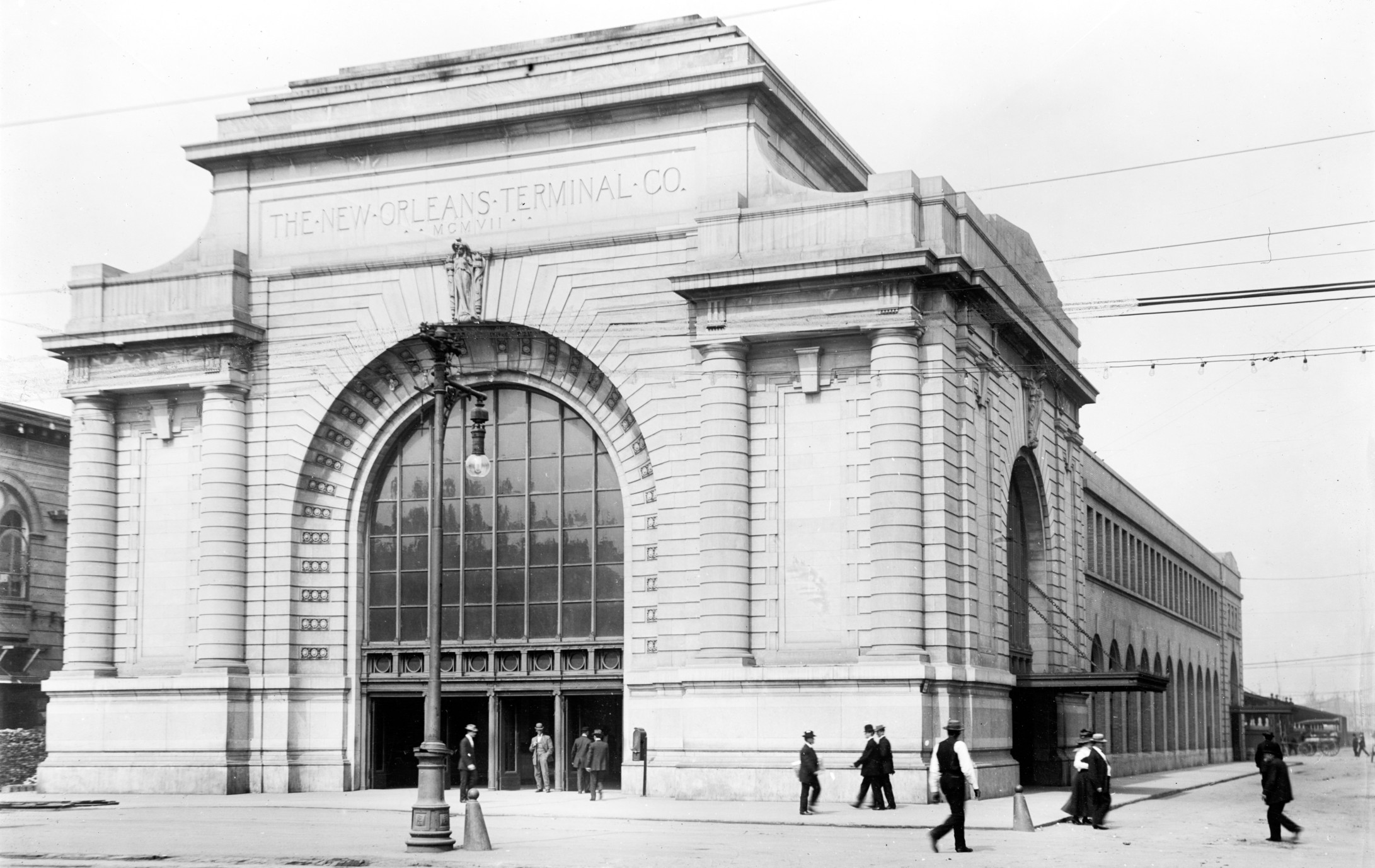 Southern Railway Terminal Station circa 1915, courtesy of the Library of Congress

In the early 1900s, the New Orleans Terminal Company, an asset of the Southern Railway Company, built what is now the Back Belt Railroad for trains traveling east-west across present-day Lakeview, City Park, and Gentilly. Needing to get into downtown, the company installed switches by Greenwood Cemetery to gain access to the right-of-way of the Old Basin Canal, along which they built a track bed on its upper side. The company commissioned the famed Chicago architect Daniel Burnham to design the Beaux Arts-style Terminal (Southern Railway) Station on Basin Street at Canal—all within steps of Storyville’s brothels along Basin Street, near the turning basin of the Old Basin Canal. In the years ahead, this elegant passenger depot hosted service not just from the Southern line but also the Mobile & Ohio, the New Orleans & Northeastern, and the New Orleans Great Northern railroads.

By the early, railroads as well as trucks were outcompeting the old waterways for cargo traffic. Now there were various ways of getting lake-area resources into New Orleans, and the old canals were the slowest and most cumbersome. The rise of automobiles, meanwhile, put new demands on transportation management, and thousands of motorists came to see the Old Basin Canal as nothing but a traffic obstacle.

The canal suffered another setback in 1913 when the Louisiana Conservation Commission ruled that “lake oysters” must enter the city via the state-owned New Basin Canal rather than the private Old Basin Canal, which had a reputation for cheating the commission of tax revenue.

By the 1920s, the Old Basin Canal, now under the control of the railroads, came to be viewed as a nuisance and eyesore. Its fetid waters were clogged with water hyacinth, and it became the scene of all too many accidents and drownings.

In 1924, the city purchased the right-of-way with the intention, according to the New Orleans Item, of “removing the menace to health of the Old Basin canal…and converting it into a parkway or a sunken garden.” As part of the transformation, Carondelet Walk was renamed Lafitte Street. The filling of the channel began in 1925 and proceeded incrementally in subsequent years, followed by minor landscaping improvements in the early 1930s. Plans for a longer linear park, meanwhile, fell by the wayside, and the space became more of a vacancy than an activated destination. People came to perceive of the dormant strip by its paralleling street, and the “Lafitte Street corridor” endured as a conspicuously open swath through the Fifth Ward, home to surplus traffic lights, city vehicles, and a brake tag station—mundane to say the least.

As for the Southern Railway, its passenger service got eclipsed by automobile travel; its tracks were rerouted to the new Union Passenger Terminal in 1954; and in 1955, the city had its beautiful termina on Basin and Canal demolished. The last major relic of the now-defunct Southern Railway is the older components of the Basin St. Station Visitor Center, which once housed the company’s offices and baggage facility.

Over two centuries after the opening of the Carondelet Canal, visionary citizens saw aesthetic and ecological value in the weedy strip, and in 2006 formed what is now the Friends of the Lafitte Greenway. Their goal was to convert the former canal bed, as well as the railroad right-of-way extending beyond Bayou St. John and past North Carrollton Avenue, into a bona fide park with bike lanes, recreational facilities, and sustainable stormwater management features. After years of design charrettes and neighborhood meetings, the Friends worked with city authorities to secure a $9.1 million federal grant to begin construction. 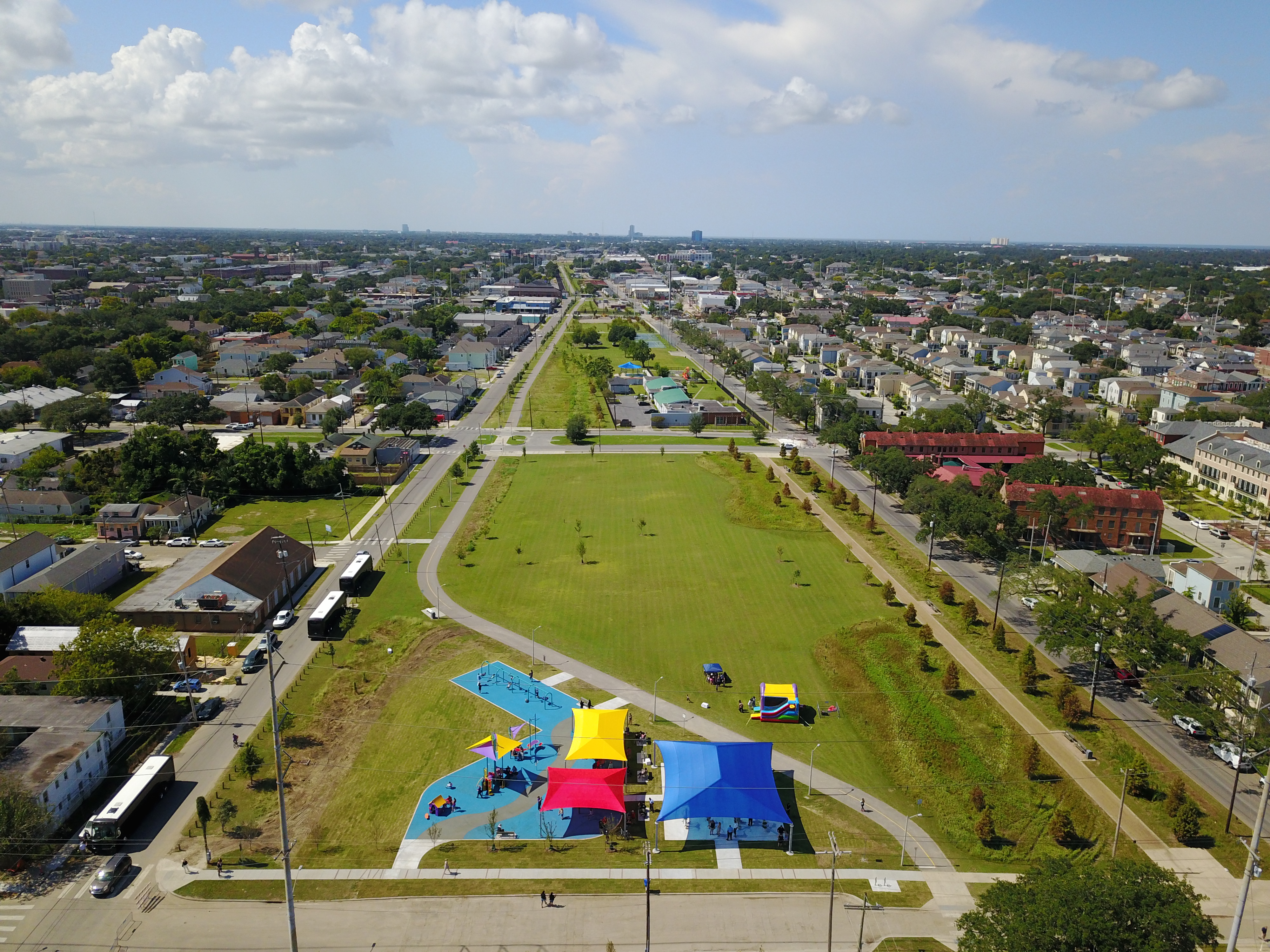 Aerial view of the Carondelet Corridor, now the Lafitte Greenway in 2018, courtesy of NORD

The Lafitte Greenway opened in November 2015, and the park, akin to Gov. Carondelet’s vision from 1794, has since helped manage runoff while also improving access—only now, it’s bioswales and underground drainage canals that absorb the runoff, and bicycles that reach the bayou. To this day, one can still see slight indentations in certain sections of the Lafitte Greenway, marking the former channel of the long-gone Carondelet Canal.

Dr. Richard Campanella is a Geographer at the Tulane School of Architecture.