We are saddened to report that staff of Friends of Lafitte Greenway were involved in the senseless and violent incident Saturday night after the Endymion parade. Executive Director Sophie Harris Vorhoff sustained multiple injuries and is in intensive care at a local hospital. Program Director Nellie Catzen was released from the hospital on Sunday. Sophie and Nellie were with four others – including Sophie’s husband – who were on bikes on their way from an Endymion party to a downtown parade.

“The board and staff of Friends of Lafitte Greenway along with their extended community of friends and family are reeling,” said board President Kevin Centanni. “We extend our deepest sympathies to the family and friends of David Hynes and Sharree Walls along with the others who were injured.”

Sharree Walls and David Hynes were friends and allies of Friends of Lafitte Greenway and our efforts. The loss of them strikes at everything we stand for.

Safety on our streets requires a deep commitment and collective effort at all levels of our community. From envisioning and investing in safe dedicated infrastructure for people on foot and on bikes, to individual and community accountability to prevent drunk driving; we all have a role to play in building a safer community. Friends of Lafitte Greenway is committed to building a safer future with the support of our allies at the City; bike, pedestrian, and transit advocates; and our friends, supporters, and neighbors. 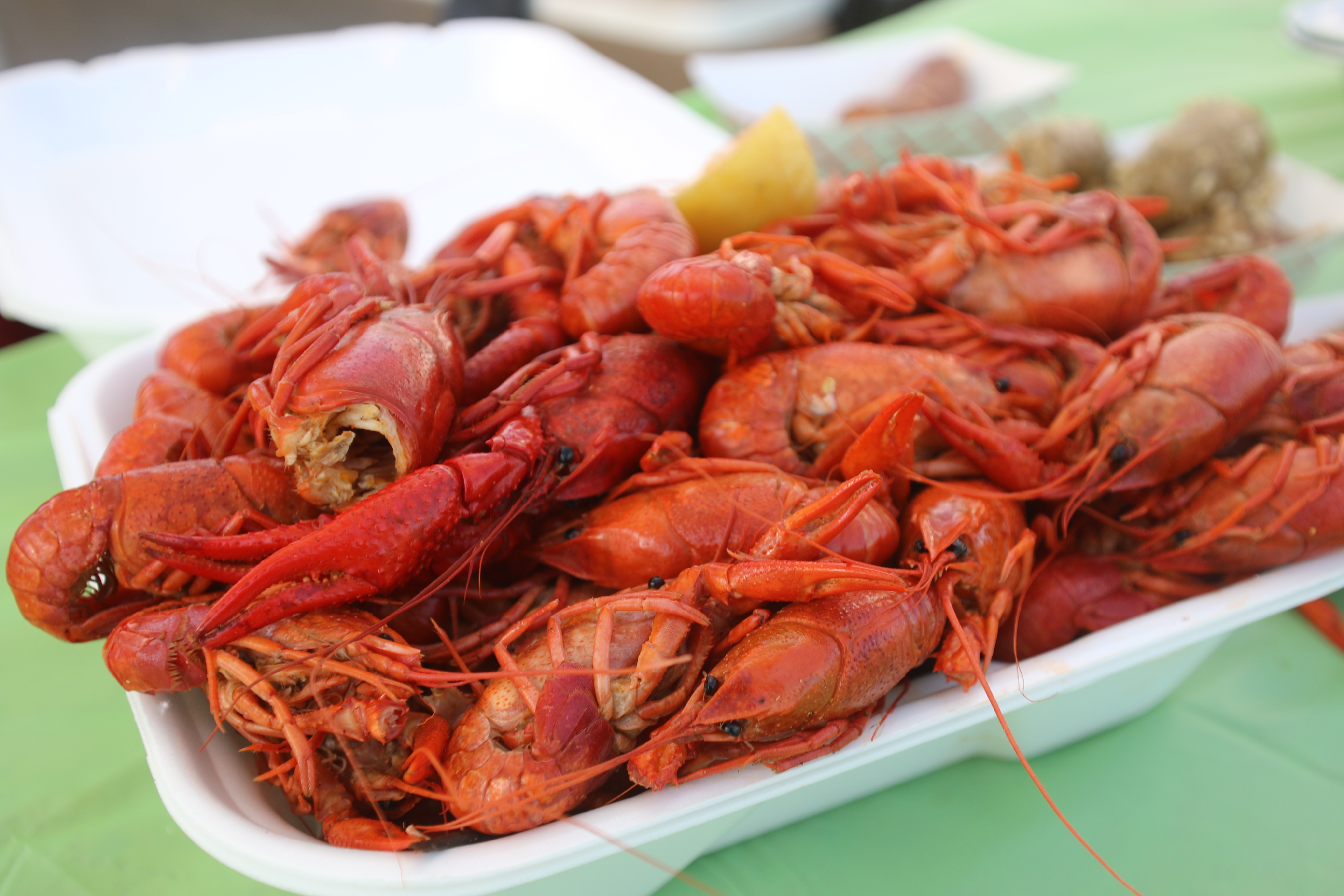 If you would like to be notified next year, please email [email protected]

Hike Fest Vendor Applications are now open! The Greenway Fest  on Saturday, March 21, 2020 will bring together the very best of the Greenway and the communities it connects for a full day of live local music, food and drink, kids activities, Greenway tours, and more.

Friends of Lafitte Greenway invites any interested restaurants, catering companies, pop-ups, food trucks, artists, artisans, and community organizations to join us and connect with thousands of Greenway neighbors and supporters at the Greenway's very first festival. Applications are due by Wednesday, February 5th.

Find out more and apply by clicking on the buttons below!

Connect the Crescent Wraps Up 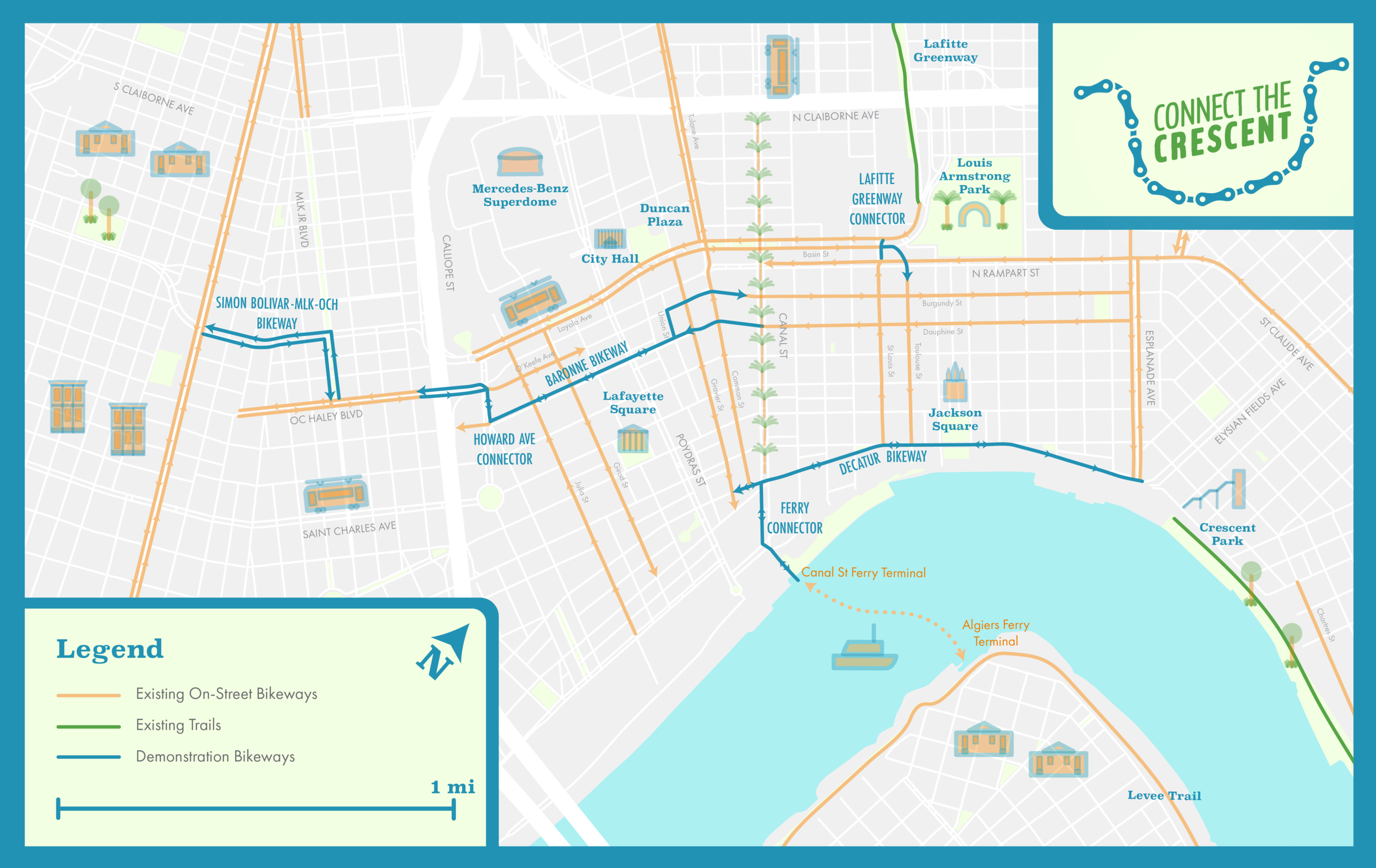 The Connect the Crescent three-month demonstration project wrapped up last week and New Orleans streets are back to their previous configurations.

We hope you had a chance to ride, walk, and enjoy the connected network of over 3.5 miles of low-stress bike-ways, pedestrian safety measures, and improved transit-stop access in the downtown area.

Make your voice be heard and take the Transportation Choices survey or submit public comment here.

Safety of trail users and the New Orleans community is our utmost priority. Until the lighting is restored, the City has increased security patrols on the Lafitte Greenway in partnership with NOPD.

If you have any questions, please contact the Department of Public Work's RoadWork hotline. [email protected] and 658-ROAD. 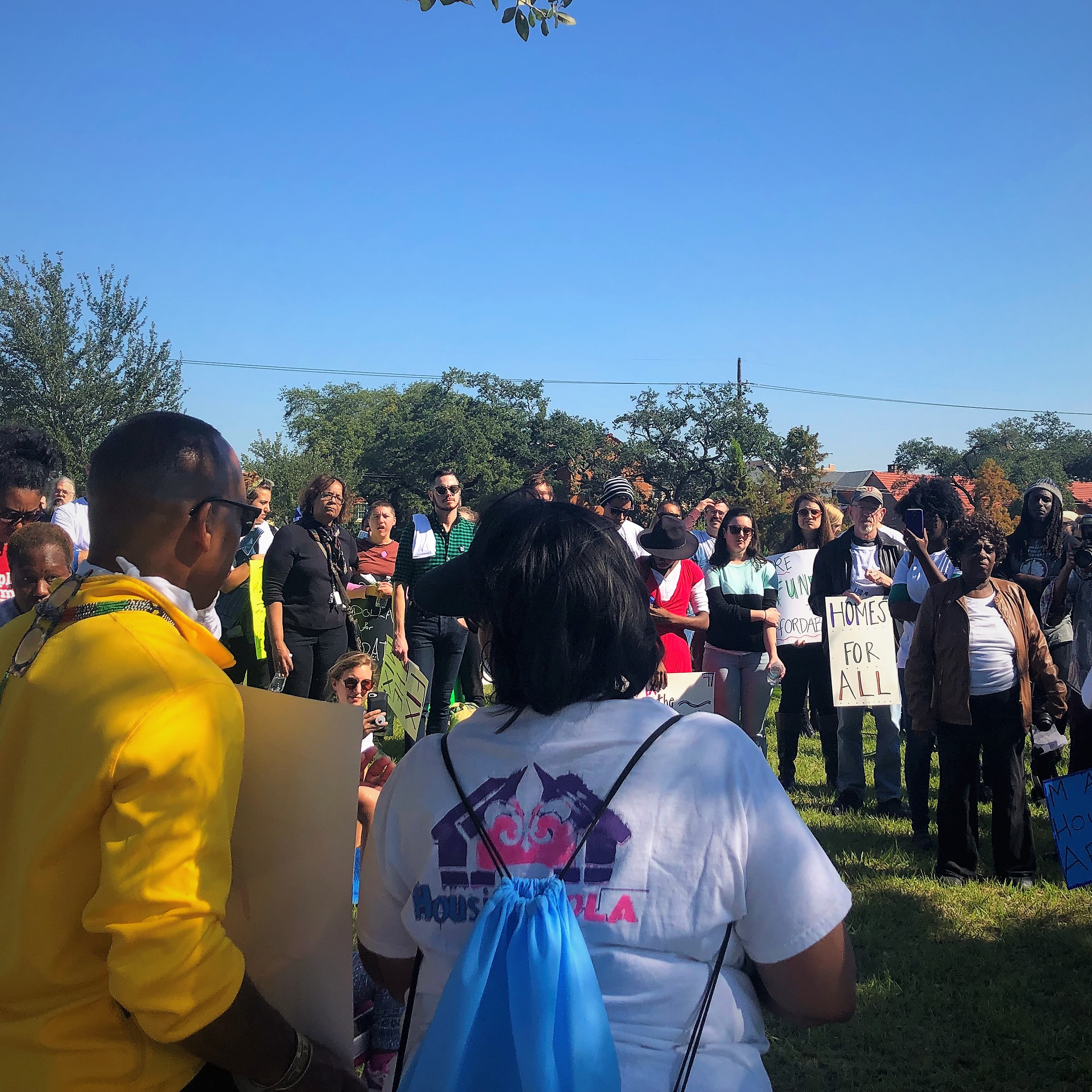 Friends of Lafitte Greenway joined the Greater New Orleans Housing Alliance's Put Housing First Rally & March on November 03, 2018. We walked the streets of the Treme/Tulane/Downtown area to spread awareness and increase community involvement regarding the lack of affordable housing in New Orleans. Gathered on the Greenway, Friends read and officially released a statement on housing affordability prepared in collaboration with our Housing Affordability Subcommittee. 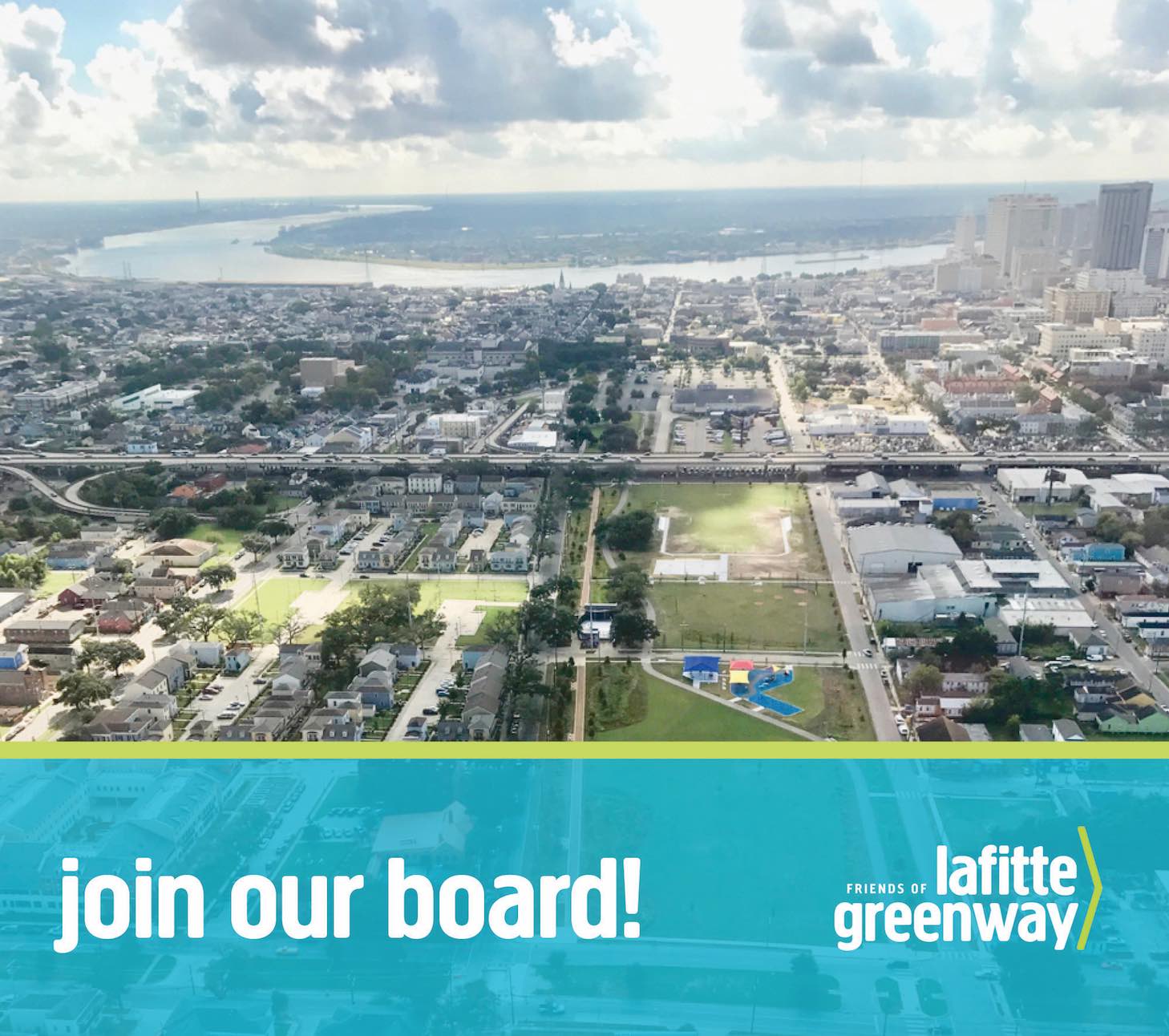 Help ensure that the Greenway is a safe, vibrant, and active community asset.

To apply for a board member position: Please submit a letter-of-interest and resume or equivalent to Friends of Lafitte Greenway’s Nominating Committee at [email protected] by Thursday, December 20th, 2018.

About Friends of Lafitte Greenway:

Friends of Lafitte Greenway was formed in early 2006 by New Orleans community members who saw an opportunity to rethink the city's landscape to enhance livability, environmental sustainability, open space equity, and health. The organization built a network of diverse constituents who shared its vision of preserving the continuous open space in the former Lafitte rail corridor, and developing a Greenway that encourages active living, facilitates economic development, and links adjacent neighborhoods, cultural features, historic sites, retail areas, and public spaces.

The Lafitte Greenway opened in November 2015 as a 2.6 mile pedestrian and bike path and linear park, connecting neighborhoods from Armstrong Park to City Park. The backbone of New Orleans bike network, the Greenway is now used by 300,000 people annually.

Friends of Lafitte Greenway (Friends) is the City of New Orleans’ official partner, working together to program, develop, and steward the Greenway. Friends is a community-driven organization, guided by a Board of Directors, members, volunteers, and staff.

Mission: To build, program, and promote the Lafitte Greenway as a great public space.

Vision: A healthy and vibrant public space that connects people to nature, their destinations, and each other.

During your 3-year tenure the organization has big plans to implement our newly adopted Strategic Plan including:

Would you like to stay up-to-date with Friends of Lafitte Greenway? Sign up for our Greenway Gazette! Here's a look at our October edition.

The 6th Annual Greenway Soirée was truly a special night! We mingled and danced under the twinkling lights, ate delicious food, and celebrated with Greenway supporters alongside the trail we love. With the help of sponsors, guests, restaurants, and auctions contributors, we raised over $60,000 to support our work to build, program and promote the Lafitte Greenway as a great public space!

Our most legendary Soirée auction yet! 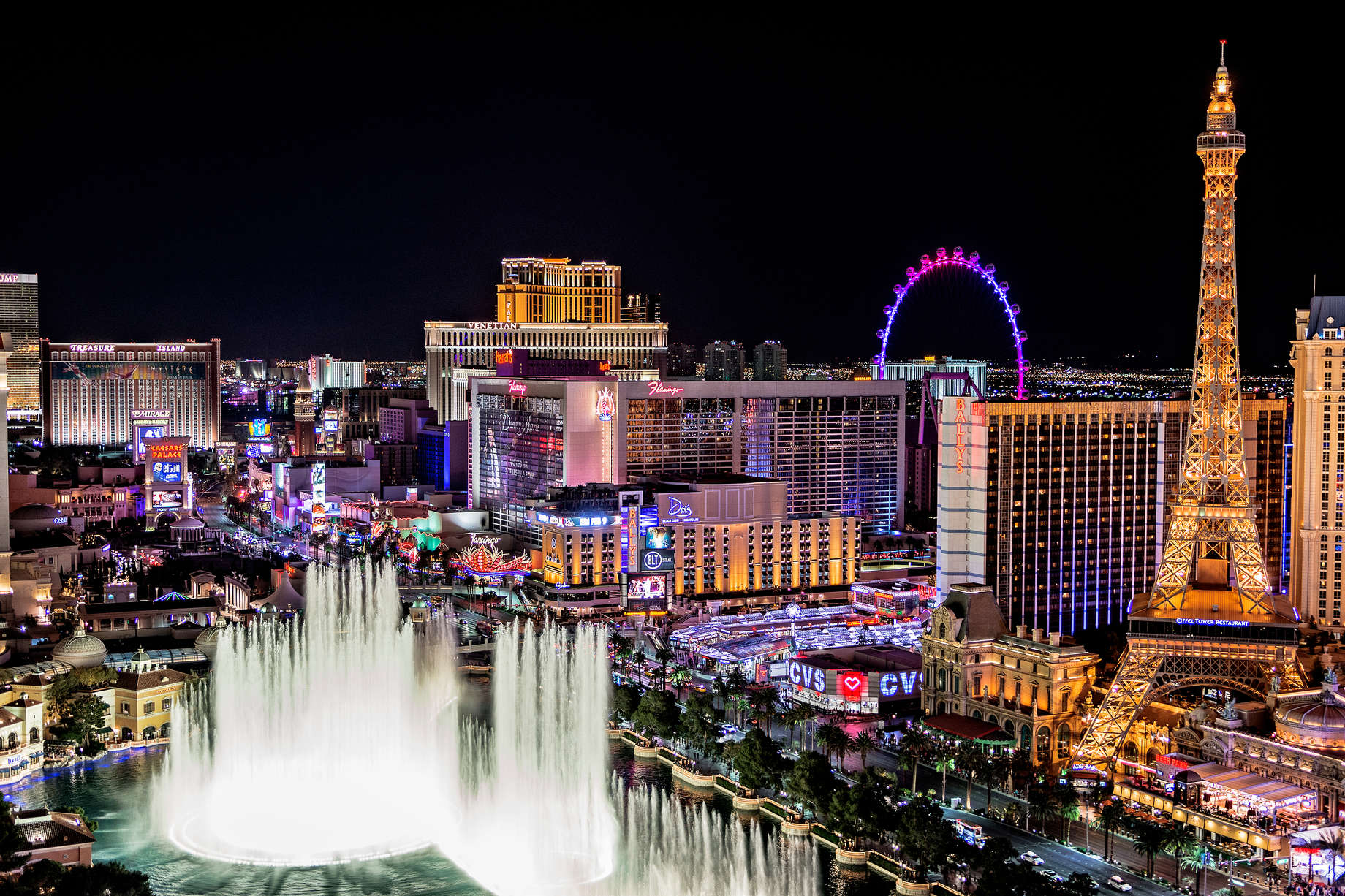 Win a trip to Vegas more at the Soirée this Friday!

Friday night, we're having the best auction in Greenway history. Don't miss out on these phenomenal items on our live and silent auctions-- bid early and often! Special thanks to our auction donors for making this incredible lineup possible.

Rest up at the Ritz-Carlton with a one night stay for 2 before you head over to the Dome to hang out with Who Dat Nation and watch the Saints take on the Los Angeles Rams with 4 club tickets to the November 4th home game.

Cruise the city in style with your new Retrospec Bicycle from Dashing Bicycles. This package also includes some accessories so that you can have the flyest bike on the street.

Enjoy an all-inclusive Saints Gameday party for you and 20 friends at Parkway Bakery and Tavern! You choose the game, bring your crew to Parkway, and enjoy poor boys, cold drinks and a keg of Dixie while cheering on the Saints on the big screen. 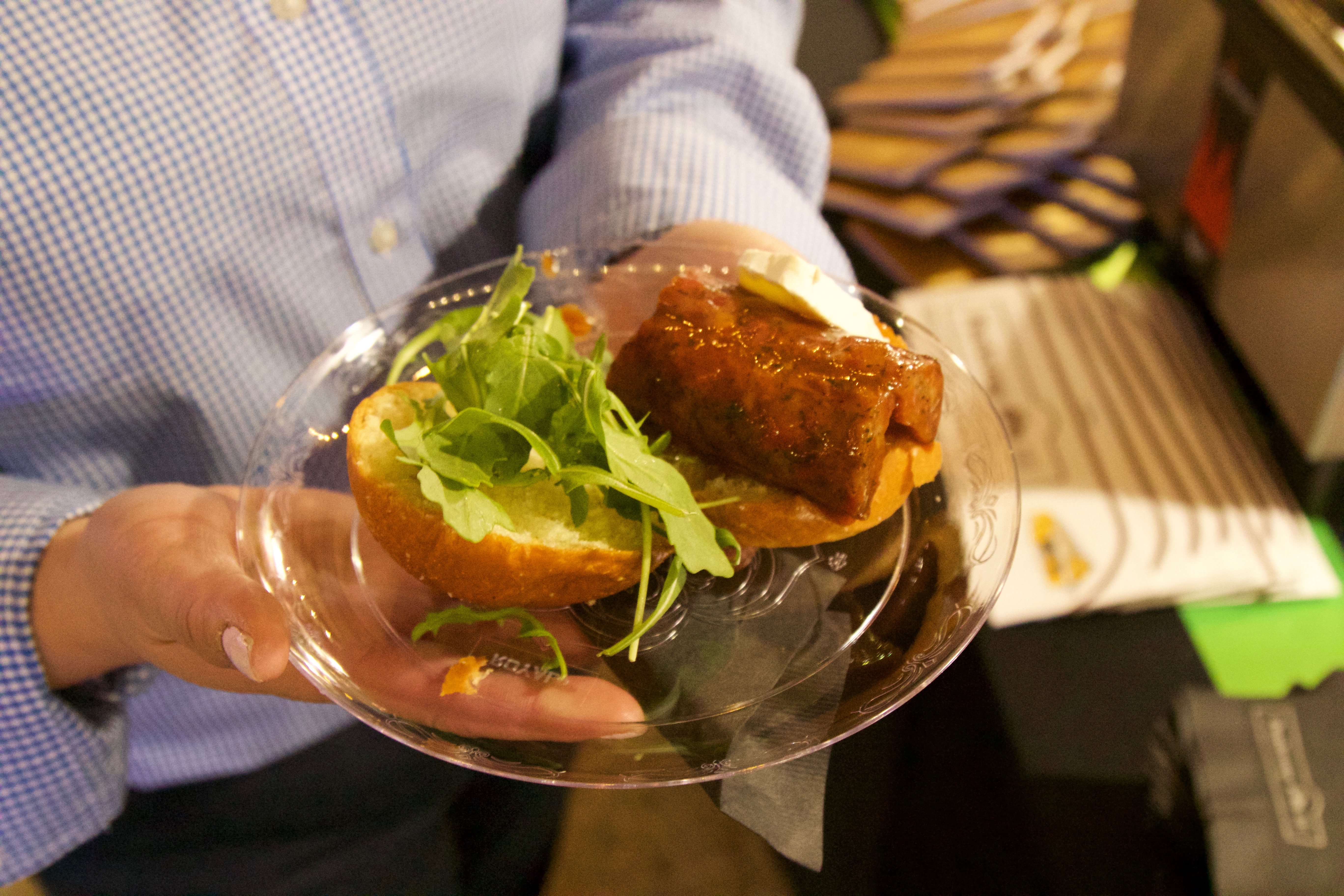 The 6th Annual Greenway Soirée is just over a week away! Next Friday, October 5th, hundreds of Greenway Supporters will mix, mingle, dance and celebrate the Greenway we love. We're delighted to announce our spectacular lineup of cuisine for the event, generously donated by premier New Orleans restaurants: