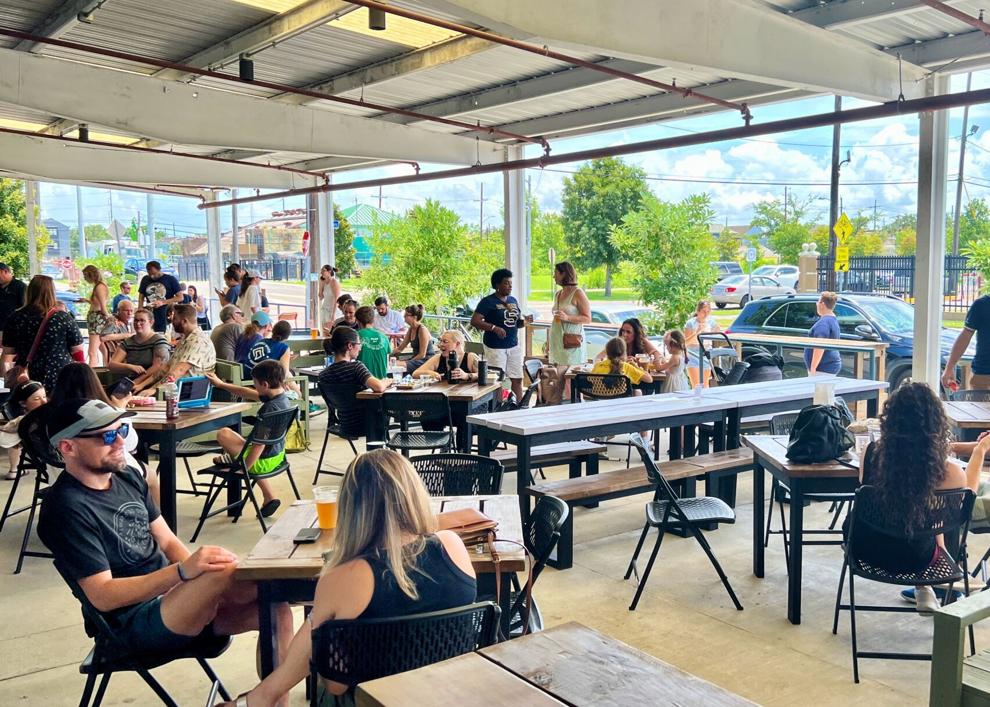 Heading down the Lafitte Greenway by foot or by bike, or maybe on the adjacent street with the windows down, you first get a whiff of roasting coffee, a morning smell no matter what time of day it happens to be.

That’s followed immediately by the warm, bakery aroma of bagels in the oven. Turn the corner and you find unmistakable evidence of a brewery, with people spilling out on the patio beer garden sipping Belgian ales.

This was the sensory succession one recent day when Skeeta Hawk Brewing invited neighbors in for a test run of its taps. The new taproom brewery is open on weekends, with plans to expand its hours in stages.

Its debut completes a trifecta of craft-oriented businesses that have taken root in the same building, holding down one corner on the Lafitte Greenway, the pedestrian and bicycle path that runs from the French Quarter through Mid-City.

The other type of brew evident in the air comes from the roaster roasting facilities at Hey Coffee Co., a local brand that supplies restaurants and shops around the city and has its own cafe here on the Greenway.

Right next door is Flour Moon Bagels. This bagel cafe from local baker Breanne Kosyk opened last month and has drawn lines of bagel devotees ever since for kettle-boiled bagels with just the right balance of crisp surface and airy inner chew.

Skeeta Hawk adds another option in the small but growing ranks of homegrown New Orleans breweries.

It was created by Aaron Merrill and his partners, after Merrill completed a long career in the U.S. Army. That service took him around the globe, much of it spent in the army’s diplomatic service. Along the way, he developed a hobby for homebrewing, especially in countries where beer is not readily available.

He spun that interest into a new calling with Skeeta Hawk. The taproom is designed around the idea of engaging his customers as directly with the brewing process as possible, almost like a home brewer showing guests around his person beer cave.

The small staff all work in the brewing process to some extent, meaning the people pouring the beer on tap likely had a hand in making it. From the taproom counter, there’s an unimpeded view of the complete brewery equipment. The brewers can pour a beer and also narrate a tour just by turning around and pointing.

“I want this to look, taste, smell and feel like a brewery, and you do that by removing as many barriers as possible between the people who make the beer and who drink the beer,” said Merrill said.

In the first days of Skeeta Hawk joining the other businesses here, the synchronicity was evident.

Early in the day, Flour Moon is bumping with business, with people lined up for elaborate tartine-style bagels or bags of a dozen to bring home. The bagel shop's side of the patio can resemble a covered picnic ground, and many of the people around it sip Hey Coffee, either the drip coffee served at Flour Moon or the espresso drinks from the Hey cafe, a few steps away.

As the afternoon progressed to the more generally accepted drinking hours, the Skeeta Hawk side of the patio grew more populated. The taproom and bagel shop plan to share more of their respective outdoor spaces during the times when their hours don’t intersect.

Skeeta Hawk doesn’t have a kitchen but hosts food trucks and pop-ups outside. This weekend (July 23 and24), look for Hatch and Harvest on Saturday and Bub's Burgers on Sunday, both from 3 p.m.

The brewery’s hours and selection are both unfolding in stages. It is pouring five beers now, with more coming by the week for the full 12-tap complement. They will change frequently, with lagers, a brown ale, a hard seltzer and West Coast IPAs in the mix (a nod to the popular style in Merrill’s hometown of Portland, Oregon).

One specialty already clear is in Belgian-style beers.

“We’re not a Belgian brewery per se, but we’ll always have Belgian beers,” Merrill said.

Saints fans (and Atlanta Falcons haters) should be pleased by the name for one of those beers. It’s a pale, smooth, easy-drinking Belgian Single dubbed 28-3.